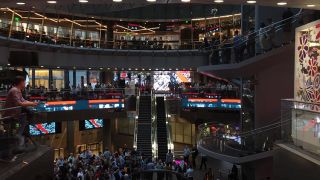 On any given day at Fulton Center in Lower Manhattan, you will find people waiting on line for their Shake Shack burger or commuters rushing off to catch their trains, but opera singers? That’s not something you see every day at the center, which recently hosted A Marvelous Order, an opera based on the lives of Robert Moses and Jane Jacobs—ideological opponents and central figures in the development of New York City in the 20th century—as part of the River to River Performance Festival.

The Center embarked on another first by utilizing the digital media landscape and control system at Fulton Center as an integral part of the production. ANC worked in partnership with Lower Manhattan Cultural Council, which has presented the festival for the past 16 years, MTA, and Westfield Partners to create an immersive theatrical and digital experience for the transit center.

“Each year we have taken a larger step in terms of complexity of the performances in the space,” said Andrew D. Harrington, president, Lower Manhattan Cultural Council.

Tying directly into ANC’s vCOMM operating system, ANC technicians could control and launch content on displays at 53 locations throughout the center, turning the digital signage network into its own live event. ANC technicians tied into the network with a hidden ethernet cable that plugged directly into a laptop to control the display network during the performance. The system also was responsible for feeding live and pre-recorded audio, which was sent wirelessly to the production’s sound mixer and distributed throughout the venue through an onsite speaker system.

Director Joshua Frankel’s imagery was reformatted for the LED and LCD screens during the performance of two scenes from the full-length opera, which included an ensemble of singers and a live orchestra. Frankel provided content for all 50 screens with a two-sided audio track that was transmitted wirelessly from ANC’s main laptop. One feed featured clicking to help keep the orchestra and singers in time with the video screens and the second feed was pre-recorded audio that was pushed directly to the screens. Eight to 10 large speakers were brought in for the event, which ANC tied into the event wirelessly.

An ANC operator was on headset throughout the performance and the entire production ran off queues based on the screens. The stage manager for A Marvelous Order made calls directly to ANC, the performers and orchestra, and other members of the production team. The performers made exits and entrances throughout the multiple levels of the transit center, interacting directly with commuters and visitors of the transit center, who become incidental audience members as they come upon the performance.

“We’re inserting our opera about Robert Moses and Jane Jacobs into a ballet of the streets,” Frankel said.

The screens were carefully synchronized with the live band and singers, creating a seamless collaboration between art and technology.

“There are videos of these people’s mouths singing that are in perfect sync with the live band and live singers,” said Daniel Sturdivant, lead technician, Westfield World Trade Center and Fulton Center, ANC. “It actually looks like someone is videotaping the singer’s mouth live and they’re all singing around it.”

Celebrating its 16th season, River to River offers more than 100 performances over 12 days of dance, music, theater, and visual arts at 31 unique sites.

“After 9/11, the American Express companies, the Downtown Alliance, Chase Manhattan Bank, and Lower Manhattan Cultural Council all banded together to create a festival to really tell people it was safe and ok to come back downtown,” Harrington added.

When selecting venues to participate in the festival, LMCC wanted to tap into spaces that had not been used previously as performance or visual art spaces, like parks and transit centers like Fulton Center.

Fulton has participated in River to River for the past three years and A Marvelous Order is the largest and most complicated piece in Fulton to date. It is the first time the digital signage network within the center has been utilized as part of a public performance, which highlights the benefits of a system capable of being flexible for live performances.

Harrington hopes this collaboration is the beginning of big things for the festival at Fulton Center. “MTA, Westfield/ANC were very cooperative with us in making this happen and without their 100 cooperation, this would not be happening.”