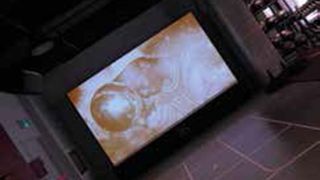 They say no man is an island, and reviewing the latest and greatest AV installs, truer words could not have been spoken. We often see the products individually at tradeshows or manufacturer demos, but it’s when we see them put together that our eyes begin to sparkle. This year, we’ve amassed the most visually stunning and forward-thinking AV implementations. So, with no further ado, we present SCN’s Installs of the Year.

Toronto’s new Air Jordan location is more than just a store: it’s an experience. That was the goal when Nike hired Advanced to design an immersive and engaging AV system. Comprised of a sophisticated Crestron-controlled multi-zone audio system, along with a dazzling showcase of Panasonic projectors and SiliconCore LED displays, this install created distinguished spaces on all three floors. Notably, Advanced designed the AV for two Jordan Standard games—interactive display-based grid tests that measure each player’s agility level compared to Michael Jordan’s. Each game operates as its own audio zone, with a fine pixel pitch LED video wall complimented by drop-down QSC speakers that target audio directly to the spot where the player stands.

The staff at St. Bernard’s Cancer Center lacked confidence in their AV system—with inconsistent technology and videoconferencing breakdowns leading to decreased productivity, and a lack of control of their digital signage systems, an audiovisual makeover was in order. Working with Sound Concepts, the facility sought to create interactive conference rooms, install high-quality microphones, and control multiple displays/TVs from one location. Using Crestron’s 4K DigitalMedia technology, meeting attendees can easily share and distribute content from any point in the room. Throughout the facility, the staff has the ability to control each television using a 5-inch Crestron touchscreen with a custom interface featuring a map of all displays/TVs through the center.

Mineta San Jose International Airport was looking for a solution that improved travelers experience while instilling an impression befitting of Silicon’s Valley reputation for innovation. The airport used a unique solution to meet its needs—three wayfinding robots, developed and launched with 22 Miles. These multilingual robots are stationed on 22 Miles Geo Mats by Gates 11, 21, and 25, and work to engage, direct, and entertain travelers. Using the built-in touchscreens, travelers can find shops, restaurants, and gates, or take a selfie. There is even a “dance” mode that allows the user to select music and then bust a move with the robot.

The upscale city of Rochester, MI, is a mix of historic and hip, attracting both local residents and visitors from around the state to its downtown. Main Street, as the area is known, is full of posh restaurants, lively nightlife, and year-round entertainment. To continue this aesthetic, the city decided to bring the fun outdoors and commission ISP Technologies to design a custom wireless outdoor sound system consisting of 36 boxes made with custom fluting and color, and utilizing ISP’s newly patented DAA power amplifier. The 350-watt True RMS per box system was installed by Wave Solutions of Grand Rapids, MI, who handled the installation and integration of the system.

A prominent Las Vegas casino was in search of a solution to replace its older, maxed-out, and problematic system in the resort’s sports book. The popular venue, featuring 100 individual horse racing corrals and additional seating in lounges and bar areas, was looking to switch to HD, have the ability to add more screens in the future, and to extend the digital feed into other areas of the hotel property. The solution was an SVSi high definition digital matrix router. The matrix is large, and with 131 outputs, a traditional matrix would have required a large investment in both money and valuable real estate in the rack room. SVSi uses traditional network switches as the matrix chassis. A network switch is an efficient and reliable matrix system, not to mention it is standards-based and non-proprietary with 48 ports in a single rack space.

The new home of the Atlanta Braves is the first of its kind—a destination that simultaneously integrates a state-of-the-art MLB ballpark with a multiuse development and community. Opening in April, fans were welcomed to The Battery, the preeminent sports and entertainment venue in the country. The Battery aims to redefine the traditional model of a “live, work, play” development into a “play, work, stay” destination. In making the 41,500-seat SunTrust Park one of the most innovative ballparks in the United States, the Atlanta Braves chose Panasonic as a solutions partner for the new stadium build and surrounding entertainment area. The area also includes a 7-by-69-foot curved NanoLumens Nixel Series LED display, installed to wrap 360 degrees around a giant metal baseball that suspends 40 feet over a water fountain.

Nashville’s 120-year-old, multilevel “Honky Tonk,” the Famous Saloon, called on local integration firm Installations, Inc. to design an ELAN automation system to modernize operations. In addition to offering instant control of the lighting, audio, video, and security, Installations, Inc. configured the system to operate automatically without the restaurant staff’s involvement. For example, hundreds of Converging Systems RGB “Tape Light” LED strips were installed throughout the venue and integrated into the ELAN system to operate on a time schedule. In the morning, the lights power on and create a “pulsing” effect. By the evening, the lights are fully ramped up and dancing in a dazzling show.

In order to restore its Life Sciences South 277 Lecture Hall to its intended collaborative and innovative work space, the university sought out an audiovisual solution that offered ease of use to instructors, displayed vibrant colors for detailed, dynamic content, and fostered a visually appealing environment to both students and guests. Working with Diversified, the University of Idaho’s AV team employed a distribution amplifier to feed nine 55-inch thin-bezel displays from LG Electronics to the lecture hall’s lectern, resulting in a 3x3 video wall display to provide high-quality visuals from any seat in the classroom.

Old and new worlds collide with the “Noctural Experience in Teotihuacan,” a projection mapping experience at the Teotihuacan Pyramids. Created by Cocolab, which specialized in multimedia technology, and Christie, this nightly 45-minute show consists of visuals projected onto the Pyramid of the Sun, then along the Avenue of the Dead, and finally reaching the Pyramid of the Moon. A total of 19 Christie Roadie 4K45 projectors illuminated the site with 20 million different color tones, enlivening the projection-mapping show, which is accompanied by the voice of a narrator telling the history of the Teotihuacan culture. Cocolab worked to the highest standards of scientific lighting for pre-Hispanic and historical monuments, ensuring that the integrity of the structures and their cultural, historic, and artistic values were never jeopardized at any time.

Wilderness at the Smokies
Sevierville, TN

TAD Associates was asked to update two conference rooms for a major New York financial institution, rooms that were more than 100 years old. The boardroom and its anteroom feature graceful arcades with original gilded plasterwork and pilasters, and were previously outfitted with three small TVs on the arcade side of the room, and a front-projection screen at the closed, short end of the room. The displays were upgraded to feature custom LED panels filling three of the arches and two large LCD screens at either end of the anteroom; the projection screen remains. Analog Way’s Ascender ASC4806-4K-PL switcher with LOE048-4K-PL expansion module drive all the displays in the boardroom and support the custom resolution of the LEDs. TAD Associates teamed with STUDIOS Architecture to come up with the design, with systems integrator Video Corporation of America selected for implementation of the new spaces.

As USI Insurance Services explored upgrades for its varied meeting spaces, it needed to ensure connectivity and collaboration; 1 Touch AVS was hired to handle the systems design and integration. Microsoft Surface Hubs were installed in the main boardrooms across all locations, 140 in total; behind the scenes, Altona’s AT-UDH-HDVS-300-KIT were integrated with the Surface Hubs to provide AV switching, plus USB and HDMI extension. All other conference rooms and training rooms use Atlona soft-codec conferencing, presentation switchers, and signal extenders to drive productivity. According to Thomas Duffany, president, 1 Touch AVS, “An executive there approached me noting that many of the presenters and other staff members were not tech-savvy. Yet, they were able to plug right in, and the system automatically worked.”

Mercedes Benz was looking for a fun way to engage event guests and connect with a younger demographic. The company approached Bravo Media about projection mapping the side of a car. Not only did they want the “cool factor” but they wanted the install to be interactive and create a social buzz. Bravo’s solution was to create a custom iPad app that allowed guests to “paint” the exterior of the latest Mercedes convertible and see their work appear in real time thanks to projection mapping via two 30,000 lumen Christie projectors. The result was a display that generated a steady stream of social activations as guests designed, photographed, and shared their one-of-a-kind creations.

With more than 750 cameras to observe, the Washington Department of Transportation (DOT) needed to ensure operators in its Traffic Management Center (TMC) could quickly and easily monitor highway accidents, traffic jams, tunnels and more. Diversified was called upon to create a 90-monitor monolithic video wall comprised of three sections: left, center, and right. The left and right sections needed to be canted inward toward the center of the room at a 30-degree angle. Once this was up and running, Diversified also created a 3x4 video wall in the center of the pre-installed 90 displays. According to the Washington DOT, the updated, state-of-the-art system provides the TMC personnel improved capabilities over their previous system, and helps make for smoother, better controlled traffic flow within the region.

The Old Church
Portland, OR

Built in 1882, The Old Church, serves as more than just a house of worship—it is a unique venue that hosts a wide range of events, from classic and rock music concerts to comedy lectures. Because the building is on the National Register of Historic Places, Pro Sound & Lighting, which integrated the project, could not touch anything on the walls or ceiling; structural engineers had to be brought in to install a new beam that could support the Alcons Audio array—out of sight, above the original duct work. Similar consideration had to be made for the look of the system as the side outfill speakers were hung on truss that had been installed around the pipe organ for lighting, with drapes carefully arranged to mask the truss structure.