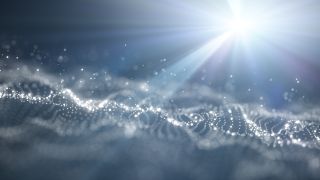 For more resources or to read the first post in this series, visit the channel page, Audio Collaboration Resources.

In the AV world, we’ve all seen a back-and-forth between the importance of the “A” (audio) versus the “V” (video) over the years. It’s easy to say that in “AV” both sides are equally important. And they are. But not only has the video side seen a greater surge of new technology in recent years—audio and video have always been, and will continue to be, very different animals.

We’ll look at new audio world developments like innovative new microphone technologies that are rebalancing the equation. But first, let’s step back from specs and marketing language laden with layers of complexity and get back to the basics of physics for a moment.

Light (that comprises any video image) travels at, well, the speed of light. Technically, that’s called fast. It’s so fast—299,792,458 meters per second (670,616,629.3844 miles per second), to be exact—that the dynamics of any particular room or space don’t wreak havoc with how the video image gets from a display or a screen to your eyes. Video images don’t bounce or reverberate around a room in odd and unpredictable ways. It’s a clean path from the display to you—and it’s so fast that, aside from line of sight, the room architecture does not come into play.

Audio could not be more different. Sound travels, in most conditions through air, at 343 meters per second. That’s why designing audio systems for everything from an outdoor concert to conference rooms is really more complex than providing video signal or video display for the “V” in AV. And that’s why, historically, it’s taken much more craft, and experience, to set up audio systems. It’s really not rocket science to provide video images for an audience or conference attendees. To do that well is by no means easy, but it’s getting easier and easier all the time. Doing audio well has perplexed many an AV pro, IT manager, and end user, and it has traditionally required much more hands-on system configuration, ongoing tweaking, and maintenance.

Even as audio has moved to digital platforms for transmission from location to location (inside a stadium, or across the country), that “last mile” or, better said, last few feet, of the audio path is the part that is still tricky. Because nothing changes the basic laws of physics that define the painfully slow speed of sound and what different architectural spaces do to sound’s path.

So let’s turn back to audio conferencing, and some really interesting new microphone technologies. If you’re looking at different audio conferencing solutions, you’ve probably heard of beamforming microphone technology—the technology featured in some in-ceiling installed systems. In the beamforming system, beams from the mics in the mic array are aimed at specific zones in the room where the meeting participants are expected to be—that is, in their chairs in predetermined locations. When nobody moves and everyone speaks within range of a beam, performance is OK. But an audio conferencing system based on beamforming still carries the inherent disadvantages of traditional ceiling mics or tabletop mics. The “mics” are still oriented towards rooms and meetings in which everyone sits around a single table and faces in the same direction—usually towards the display. It’s still not enough craft, art, or science to produce the best solution for the highest level of audio conferencing.

Thanks to efforts to achieve better audio conferencing, there are now alternatives to using beamforming. Nureva has taken a bold step and has developed its new Microphone Mist™ technology in their HDL300 audio conferencing system with 8,192 virtual microphones that tame some the challenges of, well, physics. Dedicated processing harnesses the capabilities of those mics, and additional critical processing handles acoustic echo cancellation and noise reduction, while integrating with codecs, and particularly soft codecs.

Here is some interesting information about the new alternative to beamforming, in the links below.

For more resources or to read the first post in this series, visit the channel page, Audio Collaboration Resources.

Beyond Beamforming—Some Reasons to Consider Other Options

A new e-guide: “A Brief Guide to Audio Conferencing Technologies: How to Get the System that Enables More Dynamic, Collaborative Meeting”