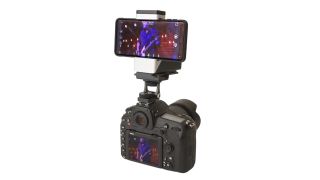 The What: Streaming solutions startup StreamGear Inc. has introduced VidiMo—short for Video director on Mobile—which turns a smartphone and HDMI video source (such as a camera) into a full-fledged, virtual production and transmission studio. VidiMo enables a single operator to produce multi-source, television-style shows that can be streamed live, recorded, or both.

The What Else: Combining the battery-powered VidiMo Go hardware with the VidiMo Show app, VidiMo lets content creators combine the compact convenience and increasing camera quality of today’s latest smartphones with the superior creative functionality of a dedicated video or DSLR camera. Users can simply capture the camera’s HDMI signal into their iOS or Android smartphone for live streaming, or use the app’s interface and advanced features to create sophisticated live shows that combine the HDMI input with the phone’s camera and other sources.

VidiMo Go hardware doubles as both an HDMI capture device and camera mounting system to position the phone for touchscreen user control and program monitoring. Meanwhile, the VidiMo Show app provides a complete live production toolkit on the smartphone, letting the user be the director, operator, and on-screen talent all at once.

For each show, users can switch between six fully customizable scene layouts that mix live video and audio sources—including the HDMI source and the phone’s front or rear camera—with graphics, text, and pre-recorded media clips. A two-button remote control enables users to trigger app functions even while performing live in front of the camera. Shows can be recorded on the smartphone as they happen or streamed live to popular third-party services including YouTube Live, Facebook Live, and Twitch.

The Bottom Line: Offering an easier way for both video professionals and enthusiasts to create and stream engaging, high-quality live productions, the new hardware-and-app combination enables anyone to become a multi-camera producer, social media video star, or citizen journalist.

StreamGear is continuing to take applications for its Early Adopter Program ahead of VidiMo’s full commercial release and is actively discussing partnership opportunities with camera manufacturers and wireless communication service providers. Prospective users and partners are encouraged to contact StreamGear at sales@streamgear.io.