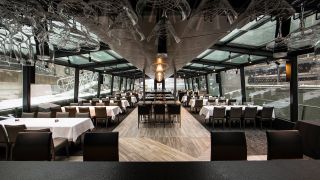 In the fall of 2018 North America’s largest dining and sightseeing cruise company, Entertainment Cruises, launched the newest boat in its fleet, the Odyssey Chicago River. The first dinner cruise on the river, the upscale vessel is glass-enclosed offering 360-degree views of downtown Chicago’s great architecture and stunning skyline. While visually an impressive experience, sonically the project would challenge any audio design team—the glass walls would create a listening environment of poor acoustics with high levels of reverberation if the right sound reinforcement system was not chosen.

The company sought out the Integrated Solutions division of OSA International to design and install the audio system. OSA’s director of integrations, Brandon Gardner, knew that they would have to limit the sound reflections off the glass. Gardner explained, “The main speakers are the d&b 16C column loudspeakers. They are a passive cardioid column speaker, which had to be used to limit excessive rear LF reflections off the back of the speaker, basically lowering how much sound bounces off the glass walls. At the time of design and install, d&b audiotechnik was the only manufacturer offering a passive cardioid column speaker, so the 16Cs were the obvious choice.”

[Bringing the Inside Outside]

Inside the boat, OSA supplemented the 16Cs with K-Array Rumble-KU210 subwoofers. A high-power passive sub, the component was chosen for both its performance and size. “I needed to fit the subwoofers into a 7.5-inch deep soffit, and the K-Array was the perfect choice as it is a dual 10-inch subwoofer that is only 6-inches deep,” said Gardner.

In addition to the interior, the boat also featured an outside observation space.  Cruising the Chicago River, the speakers would need to endure the elements.  Gardner explained the choice for the outdoors: “We also chose d&b speakers for the outside. The d&b 5Ss have one of the highest weather resistant ratings—IP34—available for performance loudspeakers, which was important considering the application. Another benefit is that they can be used as a stand-alone speaker cabinet without subs. We installed four on the bow and two on the stern.”

OSA designed the system with a BSS BLU-100 at the core. Additionally, the audio is controlled through the BSS using wall plates and an iPad application that OSA designed. Gardner concluded, “The client approached us based on our work at Navy Pier. It was exciting to be a part of the construction process of the boat and seeing the satisfaction on everyone’s faces when we turned the audio system on for the first time. The acoustics sounded great!”