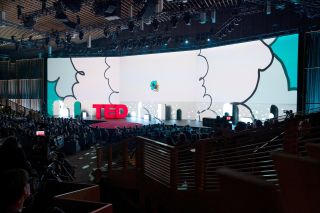 Meyer Sound has inked a multi-year partnership agreement to supply audio reinforcement systems for the annual TED Conference. Inaugurated at TED2019, held recently at Canada’s Vancouver Convention Centre, the collaboration between Meyer Sound and TED is the result of what both enterprises regard as a common culture of excellence.

“One thing that I noticed when I first reached out to Meyer Sound was that we share the same values,” said Mina Sabet, director of production and video operations for TED. “TED is of course technology, entertainment, and design, and we start with those common interests. But there was also a level of integrity that I hadn’t experienced with other companies. Meyer Sound takes their work seriously, but I also sensed an underlying commitment to inclusion and kindness, which are values important to TED.”

Of course, as implied by the title “TED Talks,” clear speech communication is critical to the success of not only the annual conferences but the entire TED concept.

“A TED Talk isn’t a talk without clear, beautiful sound, so audio quality plays a huge role for us,” said Sabet.

Maintaining consistent audio quality for both simulcasting/recording and a live audience involves a number of challenges. Working within those constraints in the custom-built, 1,200-seat wrap-around theater inside the convention center is TED audio lead Michael Noonan.

“The last thing I want to do is call the front-of-house mixer and say, ‘You’re in my way, turn it down,” said Noonan, who directs operations from the broadcast audio booth. “So we have to find ways to deliver a compelling audio experience to the live audience, to make it as rich and transparent as possible for them, yet still make it seem like there was no PA in the room for the broadcast sound. And that’s critical for the speakers, because so much of their personality, so much impact of what they are saying is wrapped up in the tonality and dynamics of their voice.”

According to Mina Sabet, the new collaboration has reaped immediate benefits in that respect. “If you’re not feeling the audio in your bones when sitting in the TED Theater, then you’re not really getting the full experience,” she said. “That was my goal this year, and Meyer Sound helped us achieve it. They redesigned our theater audio system in a way that makes you feel the sound is blanketing you throughout the talks or performances.”

The most notable simulcast location was an innovative, completely immersive experience dubbed TED Under the Stars. With lighting, set pieces, and projections set up to emulate an outdoor campsite, the space also featured an immersive sound system with 16 UP-4slim loudspeakers each pole-mounted on an MM-10ACX subwoofer. The complementary sound design — crackling campfire, birds, crickets, bubbling creek — was accomplished via a D-Mitri digital audio platform with 24 channels of Wild Tracks playback.

The smaller Community Theatre, also inside the Convention Centre, was supplied with a Meyer Sound system based around M’elodie line array loudspeakers with 700-HP subwoofers and UPJunior delay loudspeakers.

At the close of the conference, Meyer Sound’s John Monitto confirmed the value of the time and effort invested by the company in the ambitious project. “It was an incredible experience across the board,” he said. “From the quality of the presentations through the quality of technical production and the way they curate the talks. It was all just amazing.”

The five-day TED2019 program, following the theme “Bigger than us,” hosted more than 1,800 attendees from 53 countries and presented more than 100 talks and performances.

Originally launched as a closed-door conference on “Technology, Entertainment, and Design,” TED has become a global platform for sharing talks across a variety of disciplines. Videos of TED Talks are available at TED.com and on other platforms, with TED Talks Daily audio streams available on Apple Podcasts and other platforms.