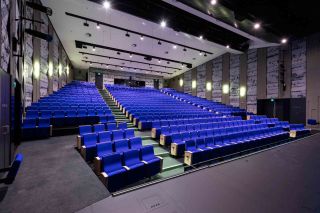 As the technology centerpiece of a total renovation project, a Meyer Sound Constellation acoustic system has been installed in the 561-seat Alexander Theatre at Monash University in Melbourne, Australia. Originally designed and built for spoken word dramatic presentation, the Alexander Theatre is now capable of hosting the full spectrum of acoustic music performances and, in conjunction with the complementary LEOPARD line array direct reinforcement system, all genres of amplified performances as well. The Constellation system is the first in a dedicated performing arts venue in Australia.

The impetus to renovate and repurpose the 50-year-old auditorium originated with Professor Paul Grabowsky who, in addition to serving as executive director of the University’s Academy of Performing Arts, is renowned throughout Australia and beyond as a jazz pianist and composer for opera, film, and television.

“We were given two options,” said Grabowsky. “One was to create an acoustical environment suitable for music through physical means by use of materials and slightly reconfiguring the space. But no matter what was done it could never be great acoustically because of the existing constraints of the building structure.”

The other solution presented was an active acoustic system. “Initially I was very skeptical,” said Grabowsky. “When you talk about intervening in a space with electro-acoustic devices, your mind immediately goes to, ‘Well, why would you want to do that? It’s not genuine.’ But the potential was intriguing so I decided to give it a listen.”

Grabowsky organized a delegation to audition several different active acoustic systems in Europe, the U.S., and Japan, at times bringing along a string quartet to perform the same pieces in evaluating each system.

The seminal moment came with a visit to SoundBox, the San Francisco Symphony’s conceptually innovative and widely acclaimed alternative venue. “Other than for us, the room was empty,” Grabowsky said. “The quartet set up and played at one end of the room, which is quite a large space. I was amazed that it didn’t matter where I was in the room, or which direction I was facing. The clarity of the music remained true, but more importantly the quality of the music did not suggest any kind of electronic intervention. It simply sounded clear, crisp, and warm, as if you were in a very good concert hall.”

Grabowsky’s preference for a Constellation solution was cemented by a later visit to SoundBox, this time for a full concert program. “Again I moved throughout the room, and that experience convinced me that, in terms of what the system was doing, it allowed for more flexibility and more musical detail than the others we had heard,” he said.

As installed at the Alexander Theatre, the Constellation system comprises three elements: sensing of the ambient acoustics, high-resolution digital processing using the patented VRAS acoustical algorithm, and distribution of early reflections and reverberant signals using more than 150 loudspeakers. For ambient sensing, 16 compact cardioid microphones are placed on stage, 16 miniature cardioid microphones are placed in the auditorium, and eight boundary-mounted omnidirectional microphones are placed in the orchestra pit. The processing is accomplished by a D-Mitri digital audio platform with 18 modules for input and output, core processing, and creation of the acoustic presets. The loudspeaker complement includes 133 full-range Meyer Sound systems (MM-4XP, UPM-1XP, UP-4XP, and UPJunior-XP) along with 19 compact subwoofers (UMS-1XPSM and MM-10XP).

“The possibility of using the spatiality of the system enables one to add a new dimension to a musical composition that has been talked about for perhaps a half a century,” said Grabowsky, “but has never been realized to this extent. I remember when I talked with John Meyer he referred to Constellation as an instrument, not just equipment, and that’s a profound indicator of this system’s potential. It allows a degree of spatial flexibility beyond any other system I have experienced.”

In the first months since reopening, the Alexander Theatre has used Constellation to optimize acoustics for a wide spectrum of events, including acoustical musical ensembles, musical theatre, and amplified concerts as well as conferences and lectures. Two notable events were a recital by celebrated classical pianist Stephen Hough and a recording session by jazz great Branford Marsalis.

The renovated Alexander Theatre is the largest of three venues in Monash University’s Ian Potter Centre for Performing Arts. The new arts complex was designed by Peter Elliott Architecture and Urban Design in collaboration with Irwinconsult Engineers and Marshall Day Acoustics, with the latter firm’s Peter Exton responsible for physical acoustics in the Alexander Theatre. Exton worked closely with the team at Marshall Day Entertech, the firm’s theatrical consulting division, to ensure seamless integration into the wider scope of the project. The centre will soon offer two more venues: a 190-seat jazz club and 130-seat sound gallery, both scheduled to open in 2019. Also equipped with a Constellation system, the sound gallery will provide a free-form environment for innovations in musical composition and performance.

A public research institution founded in 1958, Monash University has a total enrollment of over 70,000 students at multiple campuses both in the Melbourne area and at overseas locations.