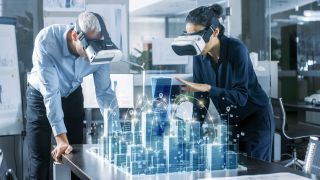 High among the trending topics at this year’s CES is smart cities—the promise that the choreographed intelligence that’s transforming our home lives will scale up to the built environment as well. But to bring such innovation about requires the cooperation of a number of entities, and this dynamic isn’t always easy to manage.

This was the theme of the discussion titled “Public-Private Partnerships to Create Smart Cities,” in which representatives from various sectors shared their recipes for progress and issues standing in the way of better implementations. Moderated by Kristin Musulin, senior editor of Smart Cities Dive, the panel consisted of Prashanthi Raman of Lyft, Chris Reeves of Horiba Mira, Sokwoo Rhee of the U.S. Department of Commerce, and Chris Craig of the City of Las Vegas.

Rhee pointed out that compared to Asia, where smart city initiatives have a much more authoritative, top-down administration, the United States must contend with the dynamics between Federal and local governments. In addition, he noted that there is a struggle between private sector companies’ emphasis on performance indicators and government entities’ value on quality of life benefits.

For Raman, it’s crucial for governments to set clear goals for their private partners. “We really have been able to be extraordinarily successful in having those individualized approaches across various cities and agencies, because not everyone is going to need the same thing,” she said.

Craig shared how Las Vegas has established an innovation district in its downtown where the city can run pilot projects with companies in a real-world setting. “We look at the social aspects of the product or solution, we look at the economic impact, things that benefit a community to make life better for its citizens,” he said.

Other topics included the struggle of attracting private interest in smaller cities and towns, issues surrounding data sharing, and the crucial role that non-profit organizations can play as a mediator in the public-private dynamic.

“We’ve got to step out in front of it and make it happen,” Craig said. “That’s the only way this revolution of smart cities is truly going to happen: if people take the lead and just do it.”