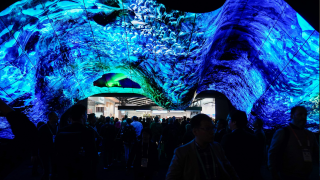 A celebrated CES tradition is continuing this year from LG Electronics with the LG OLED Wave, the latest exhibition welcoming visitors into the company’s CES booth.

The colossal and captivating LG OLED Wave is made up of 200 55-inch LG OLED digital signage screens (128 convex and concave and 72 flat). Measuring 20 feet high and 82 feet wide, the exhibit immersed CES attendees in the glory of the natural world, from the raw power of the oceans to the birth of the Aurora Borealis in the northern sky.

Visitors to LG’s CES 2020 booth also can marvel at The Fountain, a synchronized performance using 20 of the company’s 65-inch LG OLED rollable displays. The rollable LG SIGNATURE OLED TV R is the first TV in the world with a screen that can completely disappear from view, withdrawing into an aluminum base when not in use.