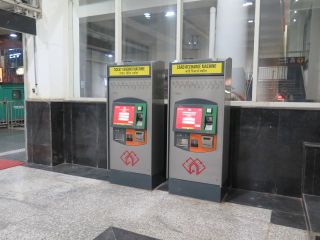 Zytronic touch sensors supplied Mikroelektronika with 17in. diagonal touch assemblies including 1cm toughened glass for protection. The modules are controlled by the ZXY100. Travelers can purchase RFID tokens for travel using coins, notes, contactless or PIN-enabled credit cards through the kiosks. The touch modules supplied work reliably in the very high summer temperatures of up to 40°C encountered in Lucknow.

Commenting, Ing. Jaromír Synek, Product Manager, Mikroelektronika said, “Lucknow Metro is a prestige project – a major new network in a fast-growing economy. The customer sought a completely reliable, intuitive touch interface which could withstand all aspects of the city environment, including moisture and spillages, physical attack, humidity and heat. Zytronic supported us fully in delivering this.”

Mikroelektronika supplies ticketing kiosks based on Zytronic projected capacitive touch technology to transport networks throughout the world. Successful installations based on Zytronic sensors include over 200 machines for the Swedish national railway network, 30 machines in La Paz (Bolivia) as well as installations in Prague (The Czech Republic); Lima, (Peru); Klaipeda (on the coast of Lithuania) and Sofia (Bulgaria).

Jaromír Synek continued, “We have partnered with Zytronic since 2007 due to the flexibility of its manufacturing service and the exceptional indoor and outdoor performance of its touch technology. Ticket machines are typically rolled out in comparatively small numbers, often 10-50 at a time. Zytronic is always able to supply exactly the number of modules we need with the right specification for our specific project. We offer customers a choice of 10”, 15” or 17” screens depending on their requirement, and Zytronic is able to support us here also. The performance of the touch sensors in the field is exceptional. We have experienced no failures in this time, and they work reliably whatever the environment. This can range from the coldest Swedish winter to hot Indian summers.”

Ian Crosby, Sales and Marketing Director at Zytronic, added, “We were delighted to be able to support Mikroelektronika in winning this prestigious project. Their success in Lucknow underlines their position as a world leader in this sector. Our long-term relationship with Mikroelektronika is based on our ability to supply them flexibly with touch assembles of the specification they need, when they need them. The range of climatic conditions encountered by their machines is truly staggering, and is a tribute to the go-anywhere capabilities of Zytronic touch sensors.”

Mikroelektronika ticket kiosks provide transport networks with a comprehensive solution for cash and electronic payment. Depending on the customer’s requirements, the kiosks can accept coins and banknotes and give change in either if required. They can also accept credit cards either using contactless or PIN-verified payments, and dispense printed tickets, receipts or (as in the case of Lucknow) tokens. Mikroelektronika machines can be entirely cashless if required.

Lucknow Metro in the northern Indian state of Uttar Pradesh began commercial operation over 8.5km on 5 September 2017. Once Phase 1 is completed, the Lucknow Metro will have two lines with a total length of 33km.