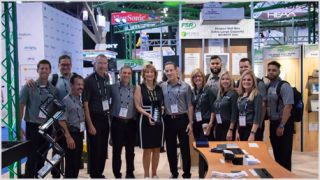 Herman has selected FSR as The Herman Vendor of the Year; FSR was presented with the award at InfoComm 2018 in Las Vegas, NV. FSR was recognized for providing exceptional engagement across every facet of their partnership, and for the company's commitment to and support of Herman’s strategic initiatives.

“Our entire team votes on the manufacturer partner that went above and beyond in supporting our partnership and strategic initiatives,” said Jeffrey Wolf, executive vice president, Herman. "FSR provides us with outstanding support in every facet of our business and has been instrumental in enabling us to achieve our growth and strategic goals.”

Jan Sandri, president, FSR, added “To be named The Herman Vendor of the Year, by such a respected member of the AV community is indeed an honor. Herman has an impeccable reputation for service and quality and we are proud and delighted to work alongside them to provide the best experience possible for our end-users. But we are also doubly privileged to have received this distinction at InfoComm in the presence of our friends and colleagues, and those we consider our industry family. We look forward to many more successful years partnering with Herman.”