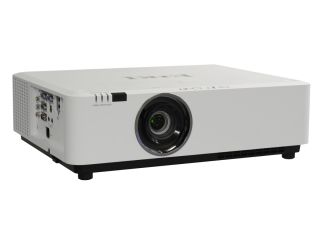 The What: Eiki International has announced its EK-355U WUXGA LCD HLD LED Portable Projector—a solution designed for medium-sized spaces where internal lighting or sunlight from outside compromise the environment. With ColorSpark HLD (High Lumen Density) LED projection technology, Eiki’s EK-355U lets one see everything on the screen in vivid color with brighter imagery.

The What Else: Featuring 5,500 center lumens brightness, a 25,000 hour HLD LED Light Source Life, WUXGA (1920 x 1200) resolution, and quick power on/off, the EK-355U is designed to be an ideal meeting projector. With 360-degree free orientation—vertical or horizontal—it offers flexible installation.

Eiki’s new EK-355U offers a wealth of connectivity options including a RJ45 connector that serves as an HDBaseT input as well as the dual HDMI ports, one of which supports MHL (Mobile High-Definition Link).