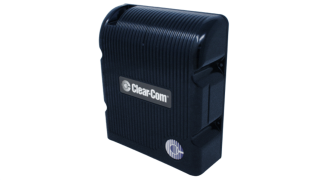 The What: Clear-Com (booth C656) will showcase its new FreeSpeak II IP Transceiver (IPT) at InfoComm 2018. The IP Transceiver is one of two products to debut at the show based on Clear-Com’s new IP Platform solution, featuring AES67 connectivity, low-latency signal distribution, high performance audio routing with high audio bandwidth. As a result, FreeSpeak II wireless beltpacks can now be addressed across a user’s LAN. Additional enhancements include supporting a higher density of users per transceiver.

The What Else: All IP Transceivers are connected to an AES67 IP switch and to the Eclipse HX system fitted with Clear-Com’s E-IPA high-density audio-and-intercom-over-IP system card. Each E-IPA card provides up to 64 ports of IP connections, which effectively supports 64 IPTs. The IPT Transceiver can be powered from a PoE switch or local power source. Direct fiber connection is also available on each IPT.

“With the addition of the new IP Transceivers, FreeSpeak II users now have even more options with their wireless solution than any other system on the market,” said Simon Browne, vice president of Clear-Com. “Today, FreeSpeak II operates on 1.9GHz and 2.4GHz bands over fiber connections. By allowing the IP Transceivers to connect over AES67-compliant IP networks, we have enhanced FreeSpeak II’s flexibility, providing an additional option for addressing customer’s ever-shifting intercom requirements.”

Existing FreeSpeak II beltpacks can be made compatible with the IPT through a firmware upgrade, eliminating the need for costly replacements.