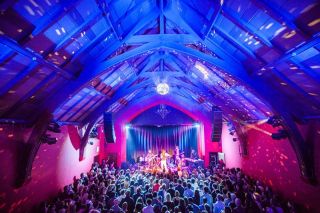 The Chapel is an historical landmark turned concert venue in San Francisco. Originally built in 1914, the 500 capacity main Chapel stage now hosts acts that run the gamut. The venue has undergone a complete sound and control system upgrade, with a total solution provided by QSC, including WideLine8 Series line array loudspeakers with WL212 subwoofers, K Series powered loudspeakers, PowerLight3 Series amplifiers and a Q-Sys audio video and control platform powered by a Core 500i processor.

Adjoining the main Chapel concert room are several satellite areas including a mezzanine, restaurant, and patio, so the mission was twofold: to provide pristine and punchy sound reinforcement for the main room while playing the same or different music in other spaces at lower volumes. The main concert room features 18 WideLine 8 line array loudspeakers and six WL212 subwoofers, all powered with the PowerLight 3 amplifiers. Additionally, eight monitor mixes feed seven legacy Concert Stage Monitor CSM12 wedges plus one CSM15 for the drummer (all PL3-powered) with numerous K Series powered loudspeakers as stage fills and on the mezzanine. Tuning the entire system to the room is a legacy RAVE 522ua, managing graphic and parametric EQ, compression and limiting, and much more. In turn, it feeds a legacy, eight-output SC28 crossover. Audio distribution to a plethora of QSC loudspeakers in The Chapel’s other rooms is accomplished by the Q-SYS platform under the control of a Core 500i processor.

“The main room is about 35 feet wide by 65-ish feet deep, front to back, and the vaulted ceiling ranges from about 16 feet at the side walls to over 25 feet at the apex,” said Chapel sound engineer Kurt Schlegel. “That’s not physically huge, but acoustically it’s challenging. We wanted every guest to have a good experience, with the people in the back hearing the band clearly without people in the front getting slammed by excessive volume.”

The Chapel “wanted to give the audience exciting bass without shaking the side walls, because we have close neighbors and volume restrictions,” said general manager Fred Barnes. “The WL212 subs proved to be the best fit in that regard.”

Barnes explained how Q-SYS manages the complex needs of distributed audio in the venue. “We have four distinct spaces at The Chapel. There’s the main venue, a large L-shaped bar with its own system of 10-inch installed speakers, a restaurant called Curio with its own bar, and the patio. We might want different music in any of those locations, or we might want to share the live performance with the entire property.”

QSC product manager Jon Graves said, “Depending on the night, the mezzanine can also do its own thing with its own music. We have K12 loudspeakers up there as fills, but they can also act as their own P.A., and there’s a floating K Series P.A. in the restaurant because sometimes an entirely different band is playing in there.”

When separate music is called for in any zone, Schlegel need not be saddled with managing it while he also mixes at FOH. “Every space has its own remote inputs into the Q-SYS network,” he explains. “So sound sources such as a DJ or an employee’s iPod can plug right in. We’re looking into adding even more inputs, so we can further subdivide zones.” Graves said. “With the TSC touchscreens in every critical area, you can select a local sound source or the main stage, control the volume of all the installed and surface-mount speakers all over the place, and do a lot more.”

Whether guests are dining in the restaurant, sipping craft cocktails at the bar, or moshing right in front of the stage, audio quality is crucial to the experience they take home. And QSC was the choice. “I won’t name names, but many other companies bid for the install,” Fred Barnes said. “At the end of the day, our owner Jack Knowles felt the QSC system sounded the punchiest and most emotionally engaging.”

“As a longtime rock guy, I was very excited to design a system that wound up achieving so much finesse in such a hard-walled, reflective room,” said Jon Graves. “The WideLine system always sounds super clean no matter what kind of act is playing. And in terms of controlling the different rooms which have different purposes, Q-SYS has everything under control.”