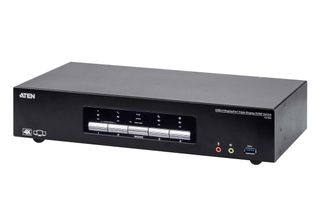 The What Else: The CS1964 supports up to 4K resolution (4096x2160 at 60Hz and 3840x2160 at 60Hz) and features SuperSpeed data transfer, with built-in two-port USB 3.1 Gen 1 hub with 5Gbps data transfer rates. ATEN Video DynaSync technology helps eliminates boot-up display problems and optimizes resolution when switching among different sources. Users can daisy chain multiple CS1964 units to create one unified operating station to increase productivity and improve workflow. With Hex-display, users can connect a second CS1964 unit for a dual triple-display setup controlled by one operator. Computer selection is available via pushbuttons, hotkeys, mouse, and RS-232 commands, and N-key rollover offers support for up to 15 simultaneous keystrokes without ghosting or jamming.

The Bottom Line: Designed to help free up clutter from the desktop, the CS1964 provides multitask switching for mission-critical operations, such as control room and call center operations (especially emergency response and surveillance), financial trading, CAD/CAM, and graphic design (especially CGI creation). The solution is suited for those needing to manage up to three displays with up to four different computers simultaneously, independently switch audio and USB between those computers, and high video resolution.