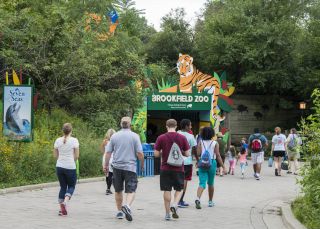 Celebrating 85 years this summer, the Chicago Zoological Society’s Brookfield Zoo in Brookfield, IL, is an iconic attraction in the western suburbs of Chicago. Those who grew up in the area will remember the Seven Seas Panorama (the nation’s first inland dolphinarium), polar bears, and tooling around the 216-acre site in the Motor Safari.

To support this initiative, the zoo recently rolled out a unified IP-based platform for paging, streaming announcements and music, emergency communications, and mass notification, with solutions from Barix and AMX driving the operation. The complete system was specified and installed by Progressive Communications Inc. (PCI), an audiovisual and systems integration company that has been working with Brookfield Zoo for nearly three decades.

“Our primary goal is to communicate to guests and staff quickly and broadly, whether by zone or throughout the entire park,” said Michael Owens, vice president, information technology, Chicago Zoological Society. “We were looking for a solution that was intuitive and easy to use, with remote programming and management features that would simplify processes from both an integration and operational standpoint. Most importantly, we wanted to do this over an IP network.”

In addition to seeking the latest network-based audio and control solutions to meet their requirements, Brookfield Zoo kept a watchful eye on cost-efficiency. Following extensive research, the team gravitated toward Barix for paging and background music distribution to multiple endpoints. The team deployed a customized Barix AudioSpread solution that addressed both of these needs, while adding Barix Streaming Client firmware on the endpoint devices at each zone to enable AMX control. AudioSpread, a specific firmware integrated in Barix’s new Linux-based devices, includes special addressing software to communicate with the priority notification port of the Streaming Client firmware.

According to Joseph Niziolek, CTS, vice president at PCI, the initial architecture used an in-house program to communicate information between a central server and the endpoint players. Early tests demonstrated undesirable delays that would prove detrimental to quickly getting the word out to staff and visitors. “The Brookfield Zoo required multiple priority channels for paging and alerts, and these channels had to move audio in and out without any delay,” said Niziolek. “To achieve our latency goals, we needed to eliminate all reliance on broadcast and multicast addressing for delivery to endpoint players. This essentially allows the audio to cross routers and reach different subnets, ultimately eliminating the delays.”

Barix built a customized Instreamer device based on its IPAM400 modular platform that could act as a server for pages and alerts. The complete solution includes a Barix Annuncicom PS16 zoned master paging station with “any-to-all” capability, along with several PS1 paging devices around the property; a total of 23 Barix Exstreamer 105 decoders are installed at the endpoints, with 40 amplifiers and hundreds of loudspeakers. The new architecture removes the delay by replicating multiple unicast audio streams to the endpoint players.

The system also integrates with a mass notification system for emergency communications; the AudioSpread solution ensures that these announcements are given immediate priority over music streams. Owens said that the zoo, which did not have a prior public address system, now has the benefit of a seamlessly integrated, IP-networked architecture that incorporates AMX NetLinx NX-1200 network control and automation, and Everbridge and Alertus Technologies mass notification and emergency communication solutions.

Owens stressed the importance of the extensive planning for the implementation, especially in configuring zones through software and testing sound quality and penetration. “There are hundreds of animal species that are sensitive to sound, and we are located in the heart of a residential community,” he said. “The AMX control platform gives us tremendous flexibility to raise, lower, and mute audio levels in specific areas or locations, and also to adjust and alter the volume of background music as necessary.”

Niziolek noted that the Barix solution, which operates on the zoo’s fiber optic ring, was straightforward to integrate. The process included some simple configuration steps to override music during announcements, or to mute or soften sound on the fly. The headend of the system is controlled from the local, on-site police dispatch and monitoring center.

PCI has an embedded employee at the location managing its network-based AV systems. Active Barix Exstreamer players provide synchronized sound so visitors have the same music experience throughout the park, with paging providing local and zoo-wide announcements, including life safety and public communications distributed to specific areas, zones, or locations.

“We started with three Barix Exstreamer players and now we are up to 23, with additional implementations planned,” said Niziolek. “There’s one central location where everything happens. We manage the AMX system, the scheduling of all the audio for the exhibits, and we can control the system remotely. The IP backbone provides the flexibility and scalability the zoo requires without consuming a lot of bandwidth.”

Local control is also provided by several RS-232 serial interfaces, which were custom-configured with engineering support from Barix.

“It’s easy to solve problems and manipulate controls, and Barix provided support to customize parts of the software,” Niziolek said. “The zoo wanted a homogenous sound for the entire park. The same song is now synchronized as patrons walk from area to area. Music is always synched and provides a cohesive audio experience throughout the zoo.”

There are plans to expand the Barix paging and IP audio solution in parking areas and at new locations that are currently under construction. “Barix has provided a solid platform that works seamlessly with the AMX control platform, and both companies have been very accommodating in assisting with customization specific to this project,” Niziolek concluded.