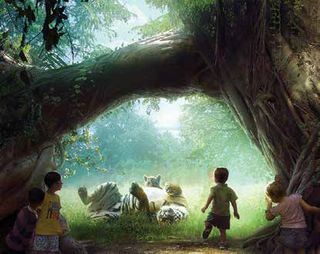 Every year, thousands of adventurers travel to Asia to see one of nature’s most majestic creatures, the tiger, in person. At zoos, you usually can’t quite get the full experience.

The conceptual art given to AEI by the zoo management, which the firm based the audio design off of. When Seattle’s Woodland Park Zoo decided to renovate its Banyan Wilds tiger exhibit in 2011, it had lofty aspirations: to create an exhibit that gave visitors the illusion of being with the animals in the wild. To achieve their audio goals, they enlisted Seattle-based AV consultants Affiliated Engineers (AEI), to whom they had turned for prior exhibit design.

“There was a piece of concept art that they showed us where you’re looking through the roots of a banyan tree,” said Thom Mullins, senior consultant at AEI. “In the middle, the focal point, are a couple of Asian tigers, one of whom is moving toward a group of four- to six-year-old kids, and it looks as if nothing’s there that would prevent the tiger from coming over and having a spot of lunch made out of one of the small children. And until you see the reflection of the boy in the glass, you don’t recognize that there’s something that’s physically separating the boy and the tiger.”

The goal for his team, Mullins said, was to achieve the same illusion of transparency with the audio system, to provide the most realistic experience of the animals as possible. To execute this, they drew upon their experience in theatrical and orchestral recording work. They started by placing Audio Technica BP4029 stereo shotgun microphones in a mid-side configuration aimed at the back of the exhibit, and Earthworks QTC40 omnidirectional condenser microphones aimed at heated rocks upon which the tigers would like to lay and sleep.

The compact size of the Tannoy QFlex 16 loudspeakers were easily hidden from sight, but they still provide clear audio, which can be steered to prevent spilling over into neighboring exhibits. “We wanted to be able to pick up the infrasonic sounds the cats make when they’re purring, which are down around 14 to 15 Hz; we typically can’t hear them but we can definitely feel them,” Mullins said. “And we also wanted to be able to pick up noises close at hand, so when they’re in front of the glass, we wanted to be able to hear them purring or talking with one another. So we ended up taking a pair of spotlight microphones and mounting them up toward the top of the glass, but aimed right down in that area that’s directly in front of the glass.”

To further enhance the transparent feel of the exhibit, the AEI team decided to eschew traditional loudspeakers in favor of six Solid Drive SD1G glass-mounted transducers, arranged in stereo pairs across three windows. “We mounted them to the safety glass that separates the tigers from the viewers, and we used that as a stereophonic loudspeaker panel, so you get the subtle effect,” said Mullins. “You can walk up to the panel and say ‘Oh, I don’t see any cats.’ But then you hear something that catches your attention, and you look in the far field and see them moving across the field from left to right, and you can find them and track them that way. Or you see them lying on the rock, and the microphone enables you to hear the cat purring.”

Beyond the experience of seeing and hearing the tigers, the zoo also placed a high priority of educating visitors about these threatened creatures. Like the rest of the exhibit, the goal was to present information to the audience in the most natural, unobtrusive way possible. In one area of the exhibit is a structure designed in the style of an Asian outpost store, with an overhanging, weather-beaten roof. The AEI team decided that this overhang would be the ideal place to hide loudspeakers for the educational lecturers.

Although Mullins and his team had previously specified Duran Audio steerable line arrays for the zoo’s Humbodlt penguin exhibit, size constraints in the tiger structure dictated a different approach. After considering other options, Mullins decided on Tannoy QFlex 16 loudspeakers. “I went back and looked at [the penguin exhibit], and opted for the Tannoy because of the cost and features, and the fact that I needed something that was steerable but not quite as tall as the shortest Duran was,” Mullins said. The compact size of the Tannoy speakers allowed them to be hidden from sight while still providing clear audio that could be steered, to prevent spilling over into neighboring exhibits.

After nearly four years spent consulting on the design of the exhibit, construction commenced this past winter, and was completed in May. Now, residents of the Pacific Northwest can get the feeling of seeing and hearing the largest cats in the world in their natural jungle habit, all without getting their shoes dirty.