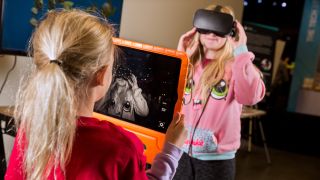 Marie Graham’s first experience with virtual reality was with Google Cardboard. A teacher and director of the VR Lab at Mount Vernon Presbyterian School, a pre-K-to-12 school in Atlanta, GA, Graham was leading a discussion on the refugee experience. But while she focused on refugees that were approximately the same age as her students, she wasn’t satisfied that the material she was presenting to her class was making the desired impact.

“I noticed a disconnect,” Graham said. “I don’t think the disconnect was because they’re not good people. They’re middle schoolers in Atlanta, GA. They don’t have the same needs.”

Enter Google Cardboard. Mount Vernon had recently received a batch of the virtual reality viewers. Graham had also recently watched The Displaced, a New York TimesVR documentary that explores the refugee crisis from the eyes of three children approximately the same age as her students. She put the two together, and seized the opportunity to get through to her class.

“I am able to point to that moment, because [there was] complete silence,” she recalled. “I feel like the first time someone uses immersive technology is almost sacred, because you’ve transported them to another place, and their body, their brain, believe they’re there. Slowly but surely, the Google Cardboards came off their faces and they were silent—which, with 13-year-olds, is not really common.” After the initial speechlessness, a soft voice piped up with: “‘Oh, Ms. Graham, they’re like us.’ It changed the way they felt. They grew; it was empathy. I used to be a nurse midwife and a nurse practitioner. I’ve delivered over 1,000 babies. I know magic when I see it, and it was powerful.”

Graham and her students took that magic and ran with it. They formed partnerships with tech companies. They approached local institutions, and ultimately, established a VR lab designed with the goal of solving real-world problems and doing good in their community. Their first project was for patients at Children’s Healthcare of Atlanta, one of the Southern United States’ largest pediatric care facilities. Its goal: to ease the burden of living through long and sometimes painful healthcare treatment by providing a virtual reality experience that enables patients to relax, escape, and feel better.

The Next Mass Medium

Graham is far from the only educator to embrace VR as a teaching tool. At the Virtual Science Center in Sunnyvale, CA, exhibit designers collaborate with tech companies, museums, science centers, and education professionals to create virtual reality experiences that will promote interest in STEM. Bill Meyer, VSC’s chief experience officer, believes that both augmented and virtual reality are positioned to become just as influential a communication medium as television was when it was first introduced.

“This is not just a new technology; it is a new human communication medium that is going to be every bit as big and important,” he said. While AR and VR have been around for a while, now this tech is more accessible and less expensive than it was in the past, which is driving adoption. “Computers are fast, video cards are fast, and it’s possible to have something that doesn’t make you motion sick and that works. But don’t mistake that for how much farther this is going to go, the same way you might think about the early days of cell phones or even smartphones.”

The Art of Simplicity

At Tenzer Technology Center at DePauw University in Greencastle, IN, Michael Boyles oversees a number of high-tech initiatives, including an AR/VR lab equipped with a number of desktop and mobile solutions, as well as a Microsoft HoloLens. He relayed that one of the university’s computer science students has been working with an art student to create an original exhibit. The project has been featured in DePauw’s Peeler Art Gallery for the past six months.

What makes AR and VR attractive is that one doesn’t need to be a coder or programmer to create a meaningful experience with this technology. Boyles pointed out that at DePauw, the Tenzer AR/VR lab is utilized by non-technical students who take advantage of existing applications to develop their projects, as well as computer science students who create more sophisticated, custom applications from scratch. “It can welcome all of them for a relatively inexpensive cost,” he said.

To simplify the creation of AR and VR experiences, Meyer counsels tech managers to select a development platform that can grow and scale with an organization over time. Unity is the platform of choice at VSC, largely because it is manufacturer-agnostic when it comes to hardware (it will support headsets from multiple developers), and it will create experiences that run easily on mobile and desktop operating systems alike. “My advice to people is to pick a platform that can grow, [so you] don’t have to worry about what happens when a new headset comes out next year,” he said.

One of the challenges Boyles and his team runs up against is that the equipment they’re currently using isn’t designed for enterprise use. “The technology that we’re using—and I think most of the universities are using for VR and AR generally—would be considered consumer technologies,” he said. This creates issues related to scalability and account management: does one establish an account per machine, or per student? How should one distribute software titles and applications? Are there any problems associated with permissions? Can permissions be centralized? At the hardware level, there is cable management to consider: “The one room we’re using now only has three virtual reality stations and each machine has two [charging cables].” Ideally, students recharge the stations when they’re finished using them, but that doesn’t always happen. “The best thing I’ve got now is manpower. The first thing we do in the morning is check [to] make sure the cables are plugged in.” A nightly reboot ensures that the system will start fresh the following day.

Boyles also noted that he endeavors to automate as much as possible. “We have user accounts, so [one of our questions was] can we script and auto-log into those accounts? We can, and we figured that out,” he said. “That’s not rocket science by any means, but it’s these subtle things that I believe make or break these experiences.” The goal, especially because this is new technology, is to make it as accessible as possible. “We want our users to come in and buy in, and have a good experience.”

VR and AR receive a lot of hype these days, and in many cases, they’re solely associated with gaming. Boyles argues that it’s necessary to move beyond this in order to receive the support required to truly take advantage of what this technology has to offer. “It’s also a good learning tool—it can supplement a curriculum. It can help a business [with] training,” he said. It’s these applications that should be discussed in educational institutions and the enterprise, he argues. “I’m big on promoting the idea of having good first impressions [of this technology]. First impressions are important, particularly for administration and [business] leaders.”

It’s also necessary, Boyles adds, to recognize that there are use cases that aren’t suited for augmented and virtual reality. “VR and AR are not the solution for everything; they can supplement learning, but they’re not the end-all,” he said. “It doesn’t make every course better, it doesn’t benefit every student—it’s not the hammer for every nail.” The good news is that it’s relatively inexpensive, which means that it doesn’t need to be positioned as the go-to solution for all learning initiatives. “It can be successful and a good investment for a campus or a learning community even if it’s only doing a couple of things.”

For Graham, creating VR projects has enriched both teaching and learning. Based on her experience, she said that the best way to enable students to achieve success with this is to get out of their way. “It is not a traditional teacher/student experience; it is more like working with peers—you’re working as colleagues, solving problems,” she said. “And what happens is—and this is true for all classes, by the way—if students are involved in real-world work, they are intrinsically motivated, [because] it’s their work and they see real-world impact. Kids don’t have to wait until they’re grown up to make a difference in the world. They can do it right now.”