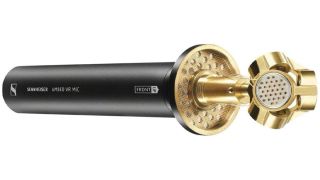 Sennheiser’s AMBEO VR Mic integrates with field recorders to allow users to listen spatially to a recording in the field.

As virtual reality (VR) grows in popularity, it’s also becoming more and more accessible. But a successful production requires more than just the appropriate camera equipment. Without proper sound, it’s only half an experience. We reached out to Sennheiser’s project manager Brian Glasscock for advice on capturing and mixing immersive audio for VR.

AV Technology: Why is spatial audio so important for VR?

Brian Glasscock: Without audio, VR is incomplete. So much of how we experience the world relies on more than vision, and hearing is a large part of it. Without matching audio for VR visuals, your virtual world is incomplete. VR cannot rely on the same tricks that film can: there’s no panning, no way to direct the viewer’s attention—you have to push them to look in the direction you want. Audio can help a lot with that, and it requires a microphone that can capture full-sphere surround sound, or Ambisonics.

How should one go about choosing an Ambisonic microphone?

Because Ambisonic audio has to be dealt with (decoded, edited, etc.) as Ambisonics, it is important to pick an Ambisonics mic that has good integration with field recorders, software, and other devices. The Sennheiser AMBEO VR Mic has such integrations. For example, its integration with field recorders allows you to listen spatially to a recording in the field, something you can’t do with other mics. Other mics typically only allow you to monitor the individual channels, not the entire spatial image, which doesn’t give the recordist an accurate picture of what they are capturing.

Do you need to augment an ambisonic mic with conventional microphones?

We recommend thinking about the Ambisonic microphone as a spatial ambience microphone and use it in situations where you might use a stereo pair or 5.1 mic. The mic will record what it actually sounds like in the space you place it, which isn’t always what you want. We suggest spot miking anything that you want to be able to have individual control over in your final mix, such as actors or specific instruments. In that way you can use the Ambisonic mic as a base upon which you can spatialize additional spot sources so you can have more precise control over the sound of the final mix.

What kind of software does one need to mix spatial audio, and how does the mixing process go?

Most DAWs support mixing in Ambisonics—basically any DAW that can support mixing multichannel audio tracks. Many people use Reaper or ProTools Ultimate. In addition to a DAW, you need an Ambisonics tool chain to help you manipulate your recorded Ambisonic signals as well as do other things like add your spot sources spatially to your mix. These tool chains will also include renders so that you can monitor your mix in the way that it will be finally delivered. This is necessary because Ambisonics is a representation of a sound-field and has to be decoded as it would be at playback (usually binaurally for VR content). There are many tool chains available, from free tools to paid suites. We have partnered with a company called DearReality, which produces and end-to-end workflow for Ambisonics. Their tools allow you to take the process one step further, by enabling you to mix in VR directly. If you use the DearReality tools, you can put on a headset, position your sources, and mix entirely in the environment you will deliver in, streamlining your work process.

Do you have any other tips for recording and mixing audio for VR?

If you are recording and working in Ambisonics, always treat the channels as a unit! This is the most fundamental mistake someone can make, and it cannot be corrected later. Ambisonics is a multichannel representation of a soundfield; it is speaker independent and describes the sound from a particular point in space. That means when you are recording, special care must be taken to ensure that you aren’t introducing undue influence on the signal with mismatched gains, etc. That’s why we have worked with field recorder manufacturers to build an AMBEO VR Mic mode into their recorders that simplifies the recording process and allows you to monitor properly on location. We have a promotion going now until the end of May with Sound Devices that can save readers some money on a VR Mic and a recorder for ambisonics work.