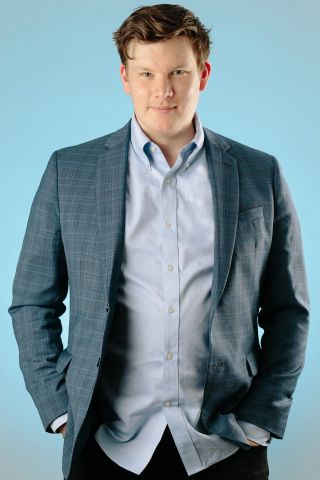 Overtime: Van De Coevering will be sharing his wisdom about innovation in event technology during a seminar at InfoComm 2018 on Tuesday, June 5 at 11 a.m.

Why You Need To Know Him: If you haven’t seen Van De Coevering’s work yet, chances are you will very soon. Currently providing digital signage, creative development, and brand experience solutions for clients throughout Las Vegas and beyond, he’s also worked on such projects as American Idol, Germany’s Next Top Model, Vegas’ Drai’s Nightclub, and what would constitute a music lover’s must-see list of festivals and events in the U.S. and abroad.

There’s no arguing he’s talented, but he’d argue that no one can be so talented on his own. “I could not have done this without connections to people who are also excited to do new things,” he said, citing Vello Virkhaus of V Squared Labs as his first and, perhaps, strongest connection made in the States. He says Virkhaus, and many others, have shared their knowledge and collaborated with him in ways that allow for seemingly limitless innovation. “Nothing’s possible without other people," said Van De Coevering.

Honest Mistakes: One of his greatest pleasures is connecting all the people he counts on. He plays something of a matchmaker, putting people to work together who may not normally do so, then watches and guides as creative solutions develop. It’s an approach that’s part of his overarching philosophy, something that may have to do with his self-described “sober thinking” Dutch upbringing— that it’s better to try something and fail, than to not try in the first place. In his own life, for instance, he tried IT, studying systems administration in college, but ultimately realized he wanted to pursue more creative opportunities. So he tried something else.

“It is always a scary thing for a lot of companies,” Van De Coevering said. “But the only way of knowing if something is possible is by actually doing it. Yeah, maybe we fail. Maybe it doesn’t work, that happens. But then you learn from that mistake, and then you can tweak it and try it again. This time, hopefull it doesn’t fail. So make mistakes! That’s how you evolve.”

Never Stop Learning: When Van De Coevering’s putting disparate parts together in that way, he’s experimenting as a way to grow. The same holds true for his life outside of work, where he’s constantly trying to learn new things, whether it’s by reading a book about quantum physics (“Which I don’t understand at all,” he noted), seeing a movie with an intriguing production, or networking with people he wouldn’t normally have met otherwise.

“I am very interested in different things,” he said. “I like to like get as much knowledge as I can.” It is, of course, a feedback loop, with his extracurriculars influencing his work, and vice versa.

“Basically any conversation I have with someone, I think, how could I benefit you, how can you benefit me, how can we create something great together?” he said. “Even if it’s someone that does irrigation repair or something. I’m like, ‘How does that work?’ I want to know! I’m addicted to information. That excites me. And there’s a lot of that available, so that works out nicely.”

Meet the rest of The Nine.