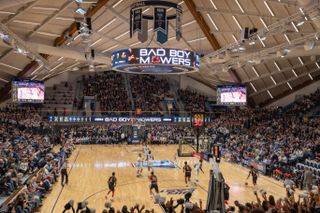 After winning their second NCAA Men’s Basketball Championship in three years, Villanova University set their eyes on upgrading the Finneran Pavilion, formally known as the Pavilion. Their goal was to integrate industry leading technology to create a best-in-class atmosphere for their players, students, and alumni.

The renovation was a complete rebuild and the high-end technology that was integrated was unlike anything the university had previously. The original Pavilion opened in 1986 and the renovation had to work with certain limitations from a building of that age. ANC worked hand in hand with the project team to address any electrical or structural issues, ensuring any issues were addressed prior to the beginning of the install.

The install is highlighted by a signature halo display, the main focal point for event attendees and fans. When integrating the display into the arena, ANC had to make sure the unit stayed within the weight limit of the existing ceiling — 5,000 pounds. ANC worked closely with Mitsubishi to ensure the unit would stay within these requirements since the ceiling was obviously a non-negotiable.

The audio and video upgrade is a highly advanced system, requiring education and training to help the university and their staff understand its full capabilities. ANC worked directly with Villanova University to understand the full capabilities of the system, including broadcast capabilities, and helped them to utilize them to their full potential. Working in unison with the LED video technology, the broadcast capabilities allowed for other media broadcast companies to hook-up directly through the system and broadcast directly. With these expanded capabilities, Villanova University hired outside staff to manage the control room, including a director and broadcast Engineer to oversee a large team that includes sound engineers, LED operators, score operators, and other technical staff. This team helps create a best-in-class technological environment, capable of handling a variety of events.

Since opening in Fall 2018, the world-class venue has hosted numerous sold-out men’s and women’s basketball games. The venue is further equipped to host a variety of other events, which may be utilized by the Villanova in the future. This technological upgrade and renovation project has helped create an electric home-court environment, something that will be enjoyed by players, students, fans, and alumni for years to come.