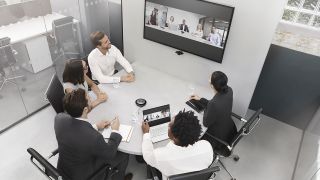 The age-old question for videoconferencing users is: “Who will steer the camera?” Few ever want the responsibility of camera control (or can figure out how to do it). Luckily, new video technologies have come to the rescue. Expensive videoconferencing appliances (aka codecs) have offered auto-tracking camera systems for years, but the original PanaCast camera was one of the first to support advanced video technologies for huddle spaces. The bright folks at Jabra have recently released a new version of this groundbreaking PanaCast camera. Does it live up to the hype?

It does, indeed. The camera easily attached to the top of my display and connected to my PC with a USB cable. That’s it, no drivers needed. I was literally up and running in seconds with my first Zoom call. Microsoft Teams and Google Hangout calls occurred without a hitch, too.

I spend a lot of time in video calls and my office often becomes an impromptu huddle space when colleagues join me for meetings. With a standard web camera, I can’t get a shot of my local participants without squeezing everyone together uncomfortably. However, the 4K PanaCast has a 180-degree field of view that uses a form of facial detection to automatically zoom the shot appropriately for the number of people in the room. The feedback from the participants on the far end of the call was positive, especially when others joined me and the auto-framing kicked in.

I was also pleased to see that the camera worked well in a small conference room when plugged into a Zoom Room. It automatically recognized the special features of the PanaCast camera and made those options available on the touchpanel. Again, no drivers or configuration were needed.

The camera produced bright images even when the environment was less than ideal with varied lighting conditions. Importantly, I only caught the camera unnecessarily reframing a shot a few times, unlike some other devices I’ve tried that will make your meeting attendees seasick with constant zooming and panning.

While most users will simply connect the PanaCast camera to their USB port and start collaborating, the more adventurous will want the advanced capabilities enabled with software. At the time of this writing there are two software packages relevant to the PanaCast 3 camera: Jabra Direct and PanaCast Vision.

Jabra Direct: Since absorbing PanaCast into the larger Jabra fold, efforts have been made to consolidate updates and management of all Jabra peripherals with the Jabra Direct application. For instance, the app recognized that my older Jabra Speak 510 speakerphone was in need of a firmware update. The process is the same with the PanaCast camera, too. It also allowed me to activate the built-in microphone, though I still recommend an external speakerphone for most conferencing needs. No matter how good a microphone is, the closer it is to your mouth, the better.

PanaCast Vision: Here’s where things get really interesting: You can control normal camera operations, such as digital pan, tilt and zoom, but you can also enable a “WhiteBoard” function through a virtual webcam.

Let’s say that your huddle space has a traditional whiteboard on the wall that you’d like to share with your remote Zoom participants. You would start your video call like normal, launch the PanaCast Vision app, enable the whiteboard feature, and then switch your Zoom camera to “PanaCast Vision.” You’ll then broadcast a digitally enhanced image of your drawings that corrects distortion due to camera placement. The camera’s 180-degree field of vision plus the software intelligence adds up to a cool party trick that can actually be very useful for ideation.

Note, however, the WhiteBoard application requires fairly substantial computer resources, so don’t plan to use it with an older PC. I was also unable to get it to automatically recognize a printed “indicator” for defining the whiteboard, instead requiring me to manually define the region to be enhanced.

For true geeks, the PanaCast Vision app can also indicate what it thinks are the people that it’s tracking. It’s an interesting insight into the workings of the software and surely portends future functionality.

Jabra tells me that the features of PanaCast Vision will eventually be integrated into the slick Jabra Direct, but it was not ready for this review. While slightly clunky in use, it’s still exciting to see how technologies in the PanaCast Vision app are enabling better collaboration at a distance with existing tools in our meeting spaces.

Criticisms of the PanaCast are minor. The included USB-A cable is fairly short, so consider purchasing the optional 1.8m one or paring it with the Jabra Hub with USB-C support. I also recommend purchasing an echo-cancelling speakerphone to ensure high-quality audio. Jabra should consider offering a huddle space bundle of the PanaCast camera and a speakerphone.

Overall, I found the latest PanaCast camera to be an impressive plug-and-play huddle space solution. I appreciated the video quality, autoframing, and ease of use, and am looking forward to improvements in the WhiteBoard application. With an MSRP of $895, adding the latest PanaCast camera is a relatively economical way to improve the web conferencing experience for everyone on your video call.

James Scott McGookey is the manager of collaboration technologies at Indiana University.