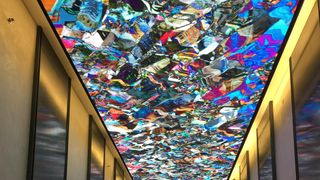 Megapixel Visual Reality of Burbank, CA is a pioneer in digital display innovation—with technology backed by over 200 patents and award wins from Live Design, the Emmys, and the Oscars.

Still, even the most technologically adept of AV forms can run into seemingly insurmountable issues; as did Megapixel VR in what could be called “The Case of 1400 Cat 6 Runs.”

“We primarily do large LED screen projects and are accustomed to the challenges that go with them,” said Scott Blair, Megapixel VR’s VP of product/project management. “Still, in one instance, we had a difficult challenge supporting a project’s massive portable LED display, due to the sheer volume of Cat 6 cables needed to run it.”

This project (which is shielded by a non-disclosure agreement) has thousands of modular LED tiles in the display. The resulting gigantic display required tens of miles of Cat 6 copper cables between the processing and tiles.

Using this many cables for signal distribution made for a long, complex set-up and tear-down. It also led to hard-to-troubleshoot reliability issues, with a lot of connectivity issues due to the many long runs of copper cable.

To put an end to this problem, Megapixel VR designed a system leveraging NETGEAR M4300 96X modular managed switches. Capable of moving uncompressed 4K video over 10GbE networks, the M4300 is preconfigured to support AV-over-IP right out of the box with no set-up required. Add the M4300 96X’s swappable modular ports design—which can support fiber/copper Ethernet plus HDMI—and putting an end to the massive number of cables was a breeze.

“Using 32 M4300-96Xs stacked together, we were able to replace the 1400 Cat 6 cables with just 16 fiber cables,” said Blair. “The time to set up and tear down this much simpler system went way down compared to using Cat 6, while the reliability rate went way up. Basically, our client doesn’t have signal distribution issues anymore.”

This success alone is enough to make Megapixel VR a big NETGEAR fan. But the company loved the M4300 (and its sister switch the M4200), long before the Case of 1400 Cat 6 Runs was cracked. The reason: “NETGEAR switches are built like tanks and are super-reliable,” Blair said. “Even before the company went into pro AV, four out of every five switches I’d see on professional live productions were NETGEAR.”

The NETGEAR M4200 and M4300 have been integrated into Megapixel VR’s new HELIOS 8K video processing system, which debuted at InfoComm 2019.

“HELIOS is the AV industry’s first 8K native input to 8K out processor in a 1RU package,” said Blair. “We’ve designed HELIOS to connect easily with conventional IP networks, which is why we use the M4200 and M4300 in its distribution system. The HELIOS processor outputs a fully uncompressed 8K video signal for carriage over eight 10GbE links, and the M4200/M4300 can connect it into a standard 10GbE network seamlessly—without the hassle caused by other manufacturers’ proprietary distribution systems that don’t always play well with others.” (These NETGEAR switches are also used in Megapixel VR’s OMNIS real-time video wall and fiber network monitoring system, which was also unveiled at InfoComm 2019.)

Applications for the M4300 Switch

A short video illustrating how easy it is to use the NETGEAR M4300 switch to quickly create a four-panel video wall.