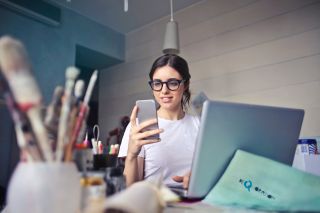 There are good interns, and there are bad interns. While much of this has to do with the individual’s own work ethic, it also speaks to how well (or how poorly) the company they’re working for structures its program. When an internship turns out to be a failure it’s a shame, because the organization lost an opportunity to groom a future—perhaps model—employee.

AVIXA aims to help AV firms succeed with their internships through its foundation. Joseph Valerio, AVIXA’s director of workforce development and program director of the AVIXA foundation, explains that the organization acts as a liaison between companies and interns (through colleges and vocational schools), and offers interns a $2,000 scholarship, which is matched by their “employer,” to help students/interns pay for tuition and books. The association also provides materials designed to guide AV companies on how to develop solid internship programs.

Stampede welcomes approximately 25 to 30 interns a year, either over the summer, or throughout the course of a college semester. Kevin Kelly, the firm’s president and COO, explains that Stampede began offering internships as a way to develop its team, “by helping [interns] decide that not only technology and AV is a great career choice, but Stampede is a great way to take advantage of all of the opportunities within our industry,” he said.

Two years ago, Stampede’s director of human resources, Kim Lonas, launched Leadership AV, a new element within the organization’s internship program. Born out of a conversation with Kelly—during which he posed the question, “how do we encourage young women to consider the pro AV industry as a career path?”—Leadership AV pairs college women with women who hold leadership roles at the distributorship, and exposes them to various facets of the AV industry through a number of assignments and interactions with industry members who work outside of the firm. At the end of the program, participants are given the opportunity to attend InfoComm.

“Junior and senior women in college are still trying to figure out where they want to be, who they want to be,” Lonas said. “They are sponges; they want to learn. I think that’s what the team that we’ve assembled here that are acting mentors take very seriously—that we’re having a positive influence on them.” The day SCN spoke with Stampede, Lonas noted that one young woman from the program was interviewing for a job with the distributorship.

Valerio underlines that the key to succeeding with internships is to offer interns meaningful opportunities to develop their professional skills. “They’re most impactful when hands-on experience is paired with a certain amount of reflection, meaning that fostering professionalism and building an intern’s business acumen through lessons that they’ve learned on the job is good for both parties,” he said.

This not only provides companies a recruitment method, it also helps to enrich the industry as a whole. “If a company can view internships as a low-risk method for workforce development, they can both groom potential employees while also empowering the students themselves—or the veteran, if they’re coming from the military—to be more competent professionals in the wider world, which again, is good for everybody,” Valerio added.

Where internships fall down is when they lack structure. Latoya Lewis, founder and executive director of EnventU, a Washington, D.C.-based organization focused on providing young people with hands-on education, career guidance, and mentorship, notes that companies need to have a plan in place so that both AV firm and the intern have a positive experience. “An [internship] should be thought of like any other open position, in that an official job description should be written for [it,]” she said. “I’ve seen many companies recruit interns because they need the manpower without any real thought as to how to best incorporate them into their current structure. Both parties suffer in this scenario, as the intern’s time and talent is not being maximized and the organization’s needs are not being met.”

And speaking of manpower, internship programs require (willing) mentors: “If the firm doesn’t have someone that can take the intern under their wing a bit, and slow down their workday enough to teach, they may not be ready for an intern,” concluded Lewis

Interns: Where to Find Them

Valerio argues that even the smallest AV firms can offer valuable internships, one intern at a time. He urges companies to develop a pipeline to potential candidates by forming relationships with local colleges and vocational schools, and to attend career days and tech industry events, such as hacker camps. He also reminds us that veterans groups are often in the business of seeking out internships for their members.

Valerio also challenges AV firms to look beyond conventional outlets: “I think we’re all observing—especially at our large trade shows—that there is an ever-growing number of career paths that overlap with our industry,” he said. “Do not be afraid to welcome students, or interns, or veterans who love to create video, who have a self-identification with our industry [and] who may not be in a traditional job sphere. They might want to build computers, they may work at hack-a-thons; they may love digital signage and want to create videos for that. I think the wider employers cast their net, the larger pool of talent they’re going to find, and the better our industry will be for it.”