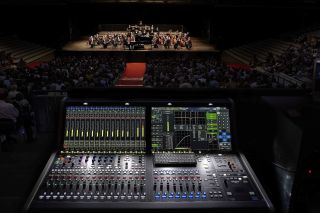 One of the most interesting innovations in audio over the last decade has been the ability to create immersive, 3D soundscapes, with integrators and artists collaborating, experimenting, and innovating with specialist manufacturers to push the envelope of possibilities.

Related: The Latest in 3D Audio

Pase is a permanent installation housed in a 70-square-meter modular pavilion in an old Venetian building that is configured according to the artistic necessities and techniques of the hosted productions. It’s an ongoing experimental project for artists who want to explore new ways of using sound, allowing them to experiment with the creation of soundscapes.

The installation was conceived as a working platform for artistic experimentation, mainly for sound production, where advanced technology—such as Soundscape by d&b audiotechnik, powered by 24 d&b loudspeakers—is a key element. Pase celebrates this production technology with the use of a motorized height-adjustable ring, made from black powder-coated steel profiles, equipped with a cluster of lights, strobe, a fog machine, and a mixing desk—transforming the space into a high-tech sound production machine.

“First of all, it's worth mentioning their reliability, [but] what is also important to us is their adaptability to any situation. Soundscape and the Lawo mc2 consoles really are customizable and straightforward to use, even for people with very little experience. Having a good setup from the start means being able to provide the artist with anything he might need on the go, which is sometimes vital.”

The process of creating these 3D sound environments largely depends upon the technology that is being deployed, according to Carli, and in this case d&b Soundscape relies on wave-field synthesis, or WFS.

“This technique (through En-Scene software) places virtual sound sources or 'objects' in real space,” Carli said. “You cannot trace back the origin of sound to the loudspeaker. Another interesting feature of Soundscape is the En-Space software, which can be used to bring the room acoustics of a place in another. These two characteristics allow great creativity for an artist.

“Together with a Lawo console and its integration with Soundscape, the whole workflow is straightforward and intuitive, which means artists can get a handle of the system quickly, making residencies an easy solution.”

Lawo, d&b audiotechnik, MediaCare, and BH Audio also teamed up to work on an intricate 3D audio setup enabling music festival organizers to transform a trade show venue with notoriously bad sound into a concert hall for Italy’s 2018 Ravenna Festival, which took place in June and July of that year in the city of Ravenna.

The Ravenna project started out as a request for a Lawo mc2-series mixing console and then evolved into a project utilizing d&b Soundscape to recreate concert-hall sound at a venue built for trade fairs. The solution was so well received by festival organizer Riccardo Muti and his wife, it was later also used in a number of opera houses, in an attempt to allow singers to remain within a comfortable level range.

BH Audio had, for the previous three years, used the combination of the d&b/Lawo platform for critical trials ahead of d&b Soundscape’s official launch at ISE 2018. Massimo Carli used this expertise to inform his work on the Ravenna Festival system setup.

Heading up the Ravenna project, Carli chose Lawo’s IP audio-capable mc236 console for front-of-house mixing, as he had previously been convinced of its adaptability during a Verdi Festival staged at the Farnese Theater in Parma.

“After three weeks of rehearsal [for the Verdi Festival] the producers wanted multi-track recordings to be made,” Carli said. “This was easy, using two recording systems connected to the console through Ravenna [RAVENNA/AES67 Virtual Audio Device by Merging Technologies].

“Then I was asked to add all the intercom and dressing room calls for the singers and choir—this was possible using only the desk’s channels and internal matrix. One day, immediately before the general rehearsal, I was asked to send sound to all the rooms in the theater. The mc236 made it possible to meet all the requests without problems—it was very easy, and very fast. With other live consoles that we have in our warehouse, it would have been much more complicated, and I probably would have needed additional equipment.”

With regard to the Ravenna Festival itself, Carli said that using RAVENNA/AES67 ensured a “very clean” setup: “From the mc236, I can send 44 direct outs and 20 post-fader AUXes to the Soundscape DS100 processor via one of its three RAVENNA/AES67 ports. And I send the DS100 outputs to the AES/EBU outputs of the Lawo Stagebox directly to the various loudspeakers. We also used a tracking system through the network to dynamically transmit the correct position of the singers to the DS100.”

Introducing the mc236 to the Ravenna Festival simplified the sound setup compared with previous years, as it required only the console and Lawo Compact I/O Stagebox in addition to the d&b DS100—connected using Cisco switches via RAVENNA/AES67. Previously, it had required an analog console with AES/EBU A/D converters, a format converter, an audio matrix and a multicore, delivering an AES/EBU output to the amplifiers.

“The mc236 gives you endless possibilities of preparation for your layout, and you can change and modify it really easy and quickly without interrupting the sound or going into ‘dangerous’ operation,” Carli said. “With most of my jobs, you have to add channels or change routing or something right up until last second—or even during the event itself. With mc236, it is never a problem.”

When it comes to the next wave in live, experiential sound, Carli and Giulia Nicosia, assistant sound engineer at both MediaCare and BH audio, both believe that 3D or spatial audio is currently experiencing its “peak moment.”

“Most companies that work in the audio business have now concentrated on this technology,” Nicosia said. “What I personally find most interesting about its possibilities is that this kind of technology is capable of being in the spotlight, actively being part of the artistic process, and also being hidden—by using it to make the whole PA disappear resulting in a sound that is extremely natural. All the nuances between these two results make this technology extremely valuable today and in the future.”

As to the future, Carli added that there has been a definite increase in the demand for more realistic and high-quality audio reproduction in recent times, and he expects this to inform what comes next—even in these challenging times where social distancing is making technological installations more difficult to facilitate.

“Especially in these trying times for the industry, we've been asked to provide content via internet, but the general feeling is that this will stay after the crisis. Therefore we are working toward high-quality, natural-sounding streaming, and this requires the right tools in order to be able to provide feeds to two independent, completely different kinds of content transportation—assuming that you cannot just double your console and staff. For these two objectives we are again still working with Lawo and Soundscape to provide the best listening experience possible.”