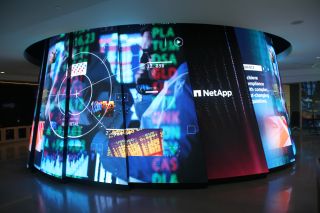 In Silicon Valley, the world capital of tech innovation, there’s a firm whose headquarters is so full of cool AV, other local luminaries schedule meetings just to come see it for themselves. But it’s not who you might expect.

NetApp, a computer data storage and cloud data services company based in Sunnyvale, CA, was founded in 1992 and is one of the world’s largest players in its industry. After experiencing tremendous success during the internet boom of the late 1990s, the company maintained steady growth over the ensuing two decades, and now brings in more than $5 billion in annual revenue by providing storage solutions for the biggest names in computing. However, according to NetApp’s senior program manager, Mike Tyler, its headquarters facility was giving visiting customers impressions of a company “stuck in the 1990s or early 2000s, based on the technology and design.”

So, during a major campus restructuring a few years back, its executives mandated that the renovated executive briefing center had to bring the company into the 21st century. “It had to have an impact right away,” Tyler said. “As customers walk through that door, [Jean English, NetApp’s chief marketing officer] wanted customers’ reaction to be over the top—big, huge, wow factor that really took the breath away from visitors as they came through the door.”

In collaboration with design firm Brand Experience and systems integrator Advanced Systems Group (ASG)—which is a NetApp partner—a concept was forged that would completely transform the feel of the brand. The briefing center was renamed the “Data Visionary Center” and plans were sketched for its centerpiece—a massive, semi-conical cylinder of video screens that English proclaimed should be so prominent that visitors could see it from the parking lot.

The concept called for 18 overlapping trapezoidal panels 12 feet tall, forming a column nearly 100 feet in circumference. According to Tyler, the design team first considered using projection before deciding that direct-view LED was the only way to achieve the results desired for the exterior. The challenge then became finding a manufacturer capable of producing the unique panels required.

“For the longest time it was very difficult to find someone who was willing to step up to the challenge of creating a trapezoid- shaped panel that didn’t have a massive border around it,” Tyler said. Eventually though, they got in contact with PixelFLEX. “They were very excited about the project; this was something they’d never done before. So, they were definitely up for the challenge.”

To drive the display, which has more than 24 million combined pixels, PixelFLEX recommended the Avolites AI server. “It’s capable of pushing the size of the file that we needed to create,” Tyler said. “The raster chosen for the media was 11,984 pixels wide by 1,188 pixels high, and it uses the AI encoder at 60 frames per second—so it’s handling some pretty huge files.”

According to Tyler, the column plays a looped video that’s about 10 minutes long (although he said the company will be producing additional content, and the loops may vary in size and length). To customize this for visitors, Tyler and his team worked with design company SenovvA to create a multilayered approach that allows NetApp to upload content to the display on a day-to-day basis. “For example, if we have a customer like Nike visiting the facility, we can upload content that says ‘Welcome Nike to the Visionary Center’ and we can upload that as an overlay to the video display over certain panels,” he said.

If this weren’t impressive enough, visitors can actually go inside the column to experience what NetApp calls its “Cloud Theater,” a 240-degree panoramic view presentation space that allows hosts of the visionary center to show customers videos that are relevant to their particular market space or their particular business use case. “So if you have someone who’s coming in to talk about banking, then we can choose from our library of videos a video that showcases how we provide solutions for the banking industry,” Tyler said. “Or manufacturing, or data mining, or it could be oil and gas. Whatever it might be, we have a library of content to showcase NetApp’s proficiency in those individual market spaces.”

A challenging setup in its own right given its space constraints, the Cloud Theater uses a dual Canon projector arrangement with custom-built spherical lenses from Eluminati and an Eluminati server that does the image blending. “You’ve got two projectors that are approximately 90 degrees from each other and are spanning to a 240-degree field of view,” Tyler said. “And this system is a challenging from a content standpoint because the pixels inside the theater, the raster sizing of the theater is 8,192 pixels by 1,425 pixels, also running at 60 frames per second. So, kind of triple- 4K content has to be produced for the interior of the theater. But it makes a very impressive presentation when you walk into it.”

Since opening in May, the Data Visionary Center’s and its crown jewel of AV have helped achieve the company’s goal of revamping its impression on its clientele. “Our customers absolutely love the space,” Tyler said. “That wow factor when they come in the doors—they’re absolutely just blown away.” But the impressive display is just a taste of what clients get when they come into NetApp’s headquarters.

The renovation also included a NetApp University space, a Founders’ Theater, a new conference center, new studios, and more. The conference center is comprised of six rooms: four feature dual 84-inch Planar display setups, one features as dual 98-inch Planar display setup, and one—referred to as the “mini theater”—features a Planar 3-by-4 video wall with 55-inch Clarity Matrix touch displays. “And that’s actually in a more casual environment, it has a couch,” Tyler said. “That’s a place where we can bring customers and it’s a more relaxed environment.”

When planning out the conferencing room setups, Tyler said he and his team were adamant about incorporating a software system that facilitated collaboration—and avoided the dreaded “death by PowerPoint” style of meetings. The software solution they settled on was Bluescape, a cloud-based collaborative interactive system that allows all manner of presentation and collaboration on the rooms’ displays. And, once the customer’s visit is complete, NetApp presenters can send them a link to their ideation session so they can revisit it at their convenience.

Tyler said the combination of enticing touch displays and participatory conversations facilitated by NetApp staff has led to more successful client meetings. “The presenter will invite customers to come up, and say ‘Why don’t you write down some of your thoughts.’ They want to touch that display,” he said. “So this invites our customers to get that tactile experience, so they walk away feeling like ‘Hey, I was part of coming up with that solution. They listened to me, they heard me, I know I was heard, I gave them my input, and together we came up with the solution.”

To take the tactile experience over the top, CMO Jean English felt that virtual reality also needed to be incorporated into the facility’s experience. So, the team worked with a software development company to create a VR game that runs on Vive hardware and Vive Pro headsets, based on the challenges of managing enterprise storage solutions. According to Tyler, the game’s objective is to create storage solutions by picking up and assembling blocks, while fighting off adversaries like hackers and viruses. “It’s a fully immersive environment that our customers have been enjoying—in fact sometimes we have a hard time pulling them away because they’re enjoying it so much,” he said. “Customers come in expecting the same old, dry kind of presentations and what they get is kind of like a business man’s version of Disneyland—all of these interactive touch displays, these wonderful physical environments.”

Of course, even with all of its magic, Disneyland’s rides break down from time to time. And AV is no different—especially with such an extensive network of systems. “The problem with living on the bleeding edge of technology is once in a while you’re going to bleed,” Tyler said. Sometimes it can be serious: on one occasion, on the morning of the visit of a customer who flew across the country just to see the Data Visionary Center and its cylindrical display, the system kept crashing because of a network setup change. Luckily, Tyler and his team were able to cleverly devise a fix in time for their arrival.

Now, the center employs a full-time AV technician who arrives at 6 a.m. each day to make sure everything is set up and configured properly, and who attends all staff meetings. However, Tyler said it wasn’t easy to convince the company of the necessity of such a role. “I think one of the challenges I’ve had was getting my management team—which is the IT organization, which only recently acquired the AV team, and doesn’t really have a lot of experience managing AV systems—to understand why there has to be a technician there every day. And until they come out and see it, and touch it, they don’t realize how complex these environments are. It needs boots on the ground on a daily basis.”

But things are running smoothly for the most part now, Tyler said, and the facility and its technology is something that has not only altered customers’ perceptions of NetApp, but transformed the way its employees feel about the company as well. “If I had to walk away with nothing else from this project, I would walk away with a sense of pride that I’ve given pride back to the NetApp employees. The employees almost unanimously said that they feel a new sense of pride in working at NetApp, that NetApp is now a company that is relevant, that is modern—that ‘this is a company that I want to work for.’ It was a long, hard slog to get where we are, but it was well worth it to get that kind of reaction and to give back to NetApp all of the wonderful things it’s provided to me.”