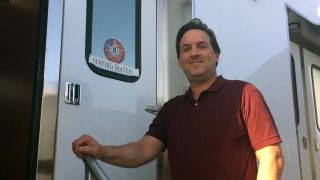 Talk about getting typecast. When actor/writer/director Bradley Cooper directed the recent hit remake of A Star Is Born, he hired William Slattery to play a hearing specialist. The role wasn’t much of a stretch because Slattery is, in fact, the actor’s real-life ear doctor. Brought in for a scene set at Coachella in which he tells Cooper’s rock star character about hearing loss, the M.D. brought veracity to the moment. As president of the House Clinic, a high-profile center for ear disease and neurological disorders in Los Angeles, he’s treated audio engineers and musicians for decades.

“What we see among audio professionals is one of two things—either they are extremely anxious about their hearing and they come in anytime there’s a change, or they’re just the opposite: They’re so busy that they tend to ignore it and not come in for their visit,” he said. “The most important thing with hearing is evaluation and then protection.”

While hearing preservation is key to the livelihood of anyone working in pro audio, not everyone is diligent about getting their ears checked. Perhaps it’s the anticipation of bad news, or the mistaken idea that hearing loss is an inevitable occupational hazard and thus isn’t worth getting tested for. However, Slattery shared, some pros may be in for a welcome surprise next time they get checked.

“A lot of times in the music industry and with sound engineers, people have this feeling that their hearing is much worse than it actually is,” he explained. “The problem is that these are people who have spent so much time tuning their ears to be able to pick up subtle little differences in sound quality, and as a result, they are much more sensitive to any type of change within the ear. Because of that, many times they think there’s some major problem and they’re fearful, not just for their hearing but for their career.”

Acknowledging that “probably the majority of people in the music industry have some issues with their ears,” Slattery pointed out that gradual hearing loss comes from more than just exposure to high decibels. “In our 20s, we start to lose some of the very high frequencies, and that’s normal—but because sound engineers work so hard to tune their ears, they can get anxious about that change. You tell them, ‘Wait a minute—this is just the aging process,’ and sometimes they’re relieved to discover they haven’t hurt themselves over the years, that they’re actually doing a good job of taking care of their hearing. That’s an important part, providing some reassurance along with ‘here’s where you’re at and here’s things that you can do to help it.’”

What are some of those things? Wearing hearing protection, whether earplugs or in-ear monitors, will help, as will avoiding loud noise when possible to prevent further damage. Another suggestion is to look into pharmaceutical treatments. “Is there anything that’s on the market that I can say is proven to rescue damaged hearing? At this point and time, no,” Slattery said, “but the advice I give to my sound engineers and musicians is that, while there is no product approved and no clinical trial that looks at protection long-term in the music industry, we can look at some interesting studies the military has done that can be helpful.”

To that end, he cited an Israeli military study that gave magnesium supplements to people going through firearms training. “Those who had higher magnesium levels actually found that it was somewhat protective of their ears,” he noted. Meanwhile, another study gave N-acetylcysteine (NAC) supplements to U.S. Marines—a move that helped protect their hearing against noise exposure.

Want more stories like this? Subscribe to our newsletter and get it delivered right to your inbox.

“That’s not necessarily rescue,” he quickly added, “but I tell people, ‘Look, if you’re going to be exposed to some loud noise for a while, you might want to consider a magnesium supplement and an NAC supplement, at least for a couple of days before you’re going to be exposed to that.’ Even so, you have to be careful about taking something like this on a long-term basis because it is a nutritional supplement, and that’s another reason to talk to a hearing professional—so you can look at what are some possibilities that may be appropriate for you.”

In Slattery’s case, talking with a patient about hearing issues had one interesting side effect—he wound up in A Star Is Born. Cooper consulted with him to ensure that the script’s medical content was accurate, and that led to inviting the doctor to essentially play himself. “Once I got to Coachella, I told Bradley I had my lines memorized, and he said, ‘Don’t worry. We’re going to ad lib it,’” Slattery recounted. “It was funny because normally as a physician, you try not to be too technical with your discussion because you want to make sure you’re conveying complex ideas in a way that everyone can understand. Of course, we start filming and it’s ‘No, no, get more technical. This will be great for the movie,’ so we started talking about 4 kHz and the noise notch and all that.” Asked if he’s now campaigning to win an Oscar, Slattery laughed: “Sure, I’m out to win the Best Supporting, Supporting Actor category.”