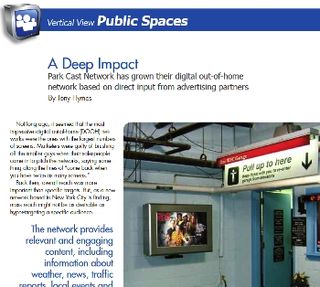 Not long ago, it seemed that the most impressive digital out-of-home (DOOH) networks were the ones with the largest numbers of screens. Marketers were guilty of brushing off the smaller guys when their salespeople came in to pitch the networks, saying something along the lines of “come back when you have twice as many screens.”

Back then, overall reach was more important than specific targets. But, as a new network based in New York City is finding, mass reach in general might not be as desirable as hyper-targeting a specific audience.

The Opportune Time
Park Cast Network has built its DOOH presence in parking facilities located in Manhattan, N.Y., and is now expanding to downtown Chicago. The company targets locations such as sports complexes, entertainment areas, financial districts, shopping centers, hotels and upscale residences. The screens are placed at strategic touch points, where parking patrons are captive for a brief time while their car is being parked or retrieved. It is during these moments that Park Cast makes its impact.

The network provides relevant and engaging content, including information about weather, news, traffic reports, local events and non-profit cause-related marketing. Interspersed with advertising from partners, such as ESPN Radio and FOX News, it is a rather simple combination of attention and content. It works because the information is stationed at a place and time when people are receptive to these sorts of messages.

“It is all of the elements coming together—presence, dwell time and engagement—that makes the network effective,” said Joe Matriss, Park Cast’s managing director.

Letting the Advertiser Lead
With the content strategy in place, the growth plan was less certain. Instead of installing a screen in every possible parking garage—a growth strategy that unfortunately is all too common in the DOOH industry—Park Cast wanted to make sure that they were going to places where advertisers would want to present their messages.

Matriss came from the outdoor advertising industry and still plays a big role in the formation of large-scale digital billboard installations in Times Square. He took the idea of letting the advertisers lead and brought it to his new project.

“We charted a map of potential locations available to us through our parking operator partners, and we ran that by our major advertisers,” he said. “We listened to them. ESPN Radio was sports-minded, and we had partnered with them because of our presence at Yankees Stadium. On their direction, we went and secured our positioning at Madison Square Garden and Red Bull Stadium in New Jersey. FOX News is oriented toward the business-minded, so we supplied the World Financial Center and other Wall Street locations.”

The Smaller the Better?
Growth is an important part of any DOOH network, especially one that is working to find its critical mass and achieve profitability. A lot of mistakes can be avoided by isolating desired locations and seeing where they fit in to an overall network. Some high-profile locations are so desirable that they can be sold billboard style, one at a time. Other locations are grouped with bigger advertising buys. Seeing the value of each individual screen makes it easier to sell and goes against the notion that the bigger the reach the better.

“As we discussed things with our media partners, we realized that within the geographic network in Manhattan, we could create specific networks,” Matriss said. “Shopping and entertainment came up a lot, so we secured the rights to several garages in Times Square to promote shows and restaurants.

“Obviously, we are all about cars, and we are definitely talking to radio stations and car companies in every market. But inside the geographical network, we are developing these hyper-targeted networks, and at some point, less becomes more.”
The ability to hyper-target means smaller buys from advertisers, but it achieves better results and leaves a positive feeling for the client. The confidence that this inspires is what has made Park Cast’s partners willing to work with them to build out the network.

Feedback and Growth
Feedback also came from new sales partner Encompass Digi Media, which was recently added as an agent to sell advertising on Park Cast’s network. In their preliminary conversations with potential clients, they have come back to Park Cast with numerous suggestions and verification that the model is working. They are also finding that breaking down the overall network into focused areas is proving the most attractive option for advertisers.

Now Park Cast is expanding their network in New York City and to downtown Chicago, a choice it made in collaboration with their advertising partners.

“It was an extension of the same philosophy,” Matriss said. “We asked our partners: what other markets do you want to be in? Now we are going to Chicago and using the same principle to develop the Chicago network, focusing on sports, entertainment, the Loop business district. It’s the Park Cast footprint in a new market, and it has been received with a lot of enthusiasm by our partners who are happy to come with us to a new market.”

With sports being an important part of their network, Matriss recently reported the company has secured the rights to the parking facilities near Wrigley Field.

Park Cast intends to take this approach to all their future expansion plans as they build out the density of locations in Chicago and New York and in the expansion to Los Angeles next year.