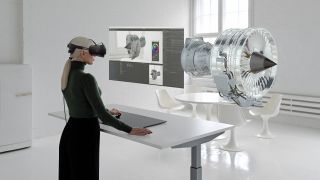 The door opened, and I ducked into the cockpit of an Airbus A350. Easing myself into the pilot’s seat, I studied the minute details in the controls and flight map. I reached for the throttle—but my hand passed through it like an apparition.

Of course, I wasn’t at the helm of an aircraft, but rather in a hotel room in Midtown Manhattan, trying out what is perhaps the world’s most sophisticated VR/AR headset: the XR-1 Developer Edition from Finland-based Varjo Technologies. With a pixel density so high that Varjo calls it “human eye resolution,” it’s easy to get lost in virtual environments. And while you can tell that you’re looking at a digitized version of reality (a very fine graining of pixels is still perceptible), it doesn’t interfere with the sense of immersion or the ability to critically discern details like small print on virtual displays.

[Varjo and Lenovo Partner on Advanced XR Computing for Enterprises]

All of what I’ve described so far, however, has been available since the company’s first product, the VR-1, was released early in 2019. Organizations around the world are employing it and its successors, the VR-2 and VR-2 Pro, for a variety of applications, including training for airline pilots.

What makes Varjo’s new XR-1 special is its augmented reality capabilities, which, when paired with the company’s just-launched 2D/3D immersive user interface called Varjo Workspace, open a plethora of opportunities for design-related fields. This “Dimensional Interface” is compatible with a number of Microsoft Windows applications and software tools, and enables designers to switch between real, virtual, and mixed-reality modes and modify their creations while experiencing them in 3D.

In my demonstration, the Varjo team of Urho Konttori, founder and chief product officer and Jussi Mäkinen, chief marketing officer, guided me through a few applications that are possible with the XR-1 and Varjo Workspace. At first, I was just sitting in a digitized version of the hotel room—reality captured through the XR-1’s imaging technology. Then, a giant floating screen appeared in front of the room’s actual TV, and Mäkinen played the trailer for the upcoming Star Wars movie on it, proving how smoothly the system is able to render content, even at such high resolutions.

Next, Mäkinen—who was operating the PC that was driving my headset with a wireless keyboard and mouse—switched me into a virtual environment, an automotive showroom of one of Varjo’s customers, Volvo. At first, the room was empty except for a blue SUV. Then, he inserted a floating display above the vehicle, essentially a Windows computer screen running CAD software. Using the software, he gradually began adding different pieces of furniture to the room around a blue SUV—demonstrating the ease with which one can design an environment from within that environment.

With Varjo’s video pass-through-based mixed reality, designers can just as easily implement virtual elements into an existing physical environment, greatly enhancing their creative potential. In fact, the XR-1 is so capable that engineers at Volvo are actually driving prototype vehicles while wearing it, to evaluate interior designs and active safety technologies.

According to Mäkinen and Konttori, the company’s software is compatible with CAD and visualization tools including Autodesk VRED, Unity, and Unreal, so designers can simply upgrade their current workflows into the realm of virtual and augmented reality.

“Varjo Workspace shows how professionals will use and interact with computers in the future,” Konttori said. “Varjo is unique in being the only product maker capable of photorealistic visual fidelity in both VR and XR, with perfect color accuracy and control. This is a key enabler for the next computing paradigm.”

Varjo Workspace is currently shipping to customers and partners as part of the software delivered with the XR-1 Developer Edition. The XR-1 Developer Edition headset is available for purchase immediately at $9,995 and is sold together with Varjo’s Software and Support service at $1,995. Varjo plans to implement customer and partner feedback in 2020 to further deepen its integration with professional design, engineering, and simulation tools.