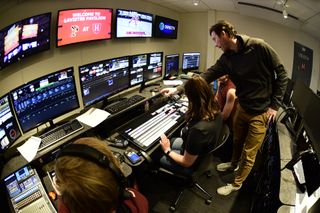 Whatever an organization’s reasons are for starting up or expanding in-house broadcasts or streams, there are a few starting points that should be integrated into a video production workflow. (Image credit: NewTek)

Whether you are new to producing visual media or an experienced hand, there is always a constant challenge of how to best use resources to create consistent and high-quality content. Entire books have been written about the process of video production, and there is plenty of material and online resources to be found. There is also an increasing number of software applications and utilities to assist with tasks such as scheduling, scripting, production planning, and more.

Whatever an organization’s reasons are for starting up or expanding in-house broadcasts or streams—be it for C-suite communications, marketing, HR, training, customer support, or other strategic content initiatives—there are a few starting points that should be integrated into a video production workflow.

To create programs that cover events in real-time—and/or to be recorded for later viewing—a production system that acts as the central hub for production is critical. At the core of the production system is the ability to switch between multiple cameras in real time at the touch of a button. These are called production switchers, and there are a number of services and technologies that can be integrated into these production systems to help users of all levels improve efficiency and quality. They are no longer just for tier-1 broadcast organizations; all types and sizes of institutions are finding ways to more effectively engage with their audiences using these systems.

That said, there is still a standardized format to content. Most productions consist of a series of scripted, repeatable actions. It is often known when a specific camera gets switched to, how a graphic appears on screen, or which media clips gets played. These known events can be planned for and programmed into production systems.

A macro editor is then used to adjust action and timing, to insert and delete steps, and to easily modify macro data with cut, copy, and paste commands. To account for and adjust to real-time production pacing, pauses and manual cues can be inserted to create multi-step macro command sequences. Macros can be triggered based on a particular change or event associated with audio, graphics, media playback, tally, and other specific activities.

While macros help to automate functions within the production system, it can also be useful to bring a level of automation to an entire show. There are various types of production automation software offering varying degrees of functionality and comprehensiveness. When the need arises for staff to deliver stories more autonomously—regardless of their level of technical expertise—an application can be used that works from a script in Microsoft Word with triggers for actions. Once loaded into the production system, this script easily executes the entire show. As most productions need to start with a script anyway, this can be a simple way for anyone to get programs completed.

A teleprompter system should also be set up. Teleprompter operations including stop, play, forward, reverse, jump to segment, eyeline position, and scroll script can be performed without affecting the output of the production system, even when it is automated.

Most production requires graphics of some sort. Working in conjunction with the production system, show openings, closes, animated titles, and lower thirds can be inserted into programs. Graphics cues, speeds, and durations can all be controlled. In addition to automating systems and shows, control of productions is another area where efficiency and flexibility can be realized. Control of production operations can be extended to everyday devices to remotely access the production systems from a laptop, tablet, or smartphone.

Remote software interface applications often also include a creation tool, making it easy to create custom controls for any type of production or operator. The tool can provide the ability to define grid squares as buttons or video windows, assign macros to buttons, and create multiple tabs for different panels.

Perhaps the greatest innovation taking place within broadcast and live streaming equipment today is the ability to move video (and audio, metadata, and other key signals like tally and pan-tilt-zoom camera controls) across a local area network in real time. Whereas typical broadcast equipment uses SDI or HDMI cables that only send one signal at a time in one direction only, emerging technologies like NDI and SMPTE 2110 can carry multiple video signals in any direction across a network, eliminating the need for long cable lengths and opening up new creative possibilities by simply plugging into an Ethernet port on the network.

NDI is free to use, already installed in a growing number of NDI-compatible products. The likes of Sony and Panasonic are adopting the technology into their PTZ cameras. It works on 1Gb Ethernet networks, which are standard in most facilities, be it an office park, school, church or other business. SMPTE 2110, meanwhile, requires a 10Gb network and likely some extra hardware. That said, both rely on IP, an approach that many in the broadcast and AV space believe will become the future connectivity standard for video production.

These are just a few of the latest concepts being used to enable producers at all levels of experience to be able to tell their stories better with both efficiency and quality. With a little research and experimenting, all types of producers can lean into their unique brand of visual storytelling.

Matt Allard is the product marketing manager for Vizrt Group.