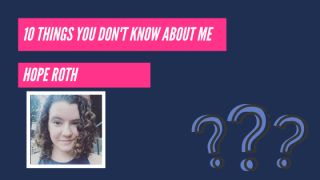 In this week's 10 Things You Don't Know About Me, we get to know Hope Roth of Riordan Brothers Integration. Hope can be found on Twitter at @BeerAndPie.

1. My Twitter handle (@beerandpie) comes from a self-produced rock album that I put out in 2008. I lost money on the venture (doesn’t everyone?), but I did get to collaborate with Roger Miller from Mission of Burma and Robert Holmes from Til Tuesday, so that was pretty cool. I still have about 800 copies of the CD in my basement.

2. I spent the spring semester of my  junior year of college studying Religion and Anthropology in Nepal. As part of our program, I got to spend two weeks in Tibet. I’m still in contact with my host family… the internet is such a wonderful thing! Everyone always asks why a Computer Science major would go to Nepal and I always say “because I could.” I had a fairly brutal fall in my junior year in order to get all my required courses in, but it was worth it for a once-in-a-lifetime experience.

3. My undergraduate degree is in Computer Science, but I also have a Master’s degree in History. I wrote my thesis about Jackie Robinson, Wendell Smith, and the integration of Major League Baseball. I still want to take a sabbatical someday and do enough research to write an entire book about Wendell Smith. I got my Master’s because I was working at Tufts and could take classes for free. I guess you could say I do a lot of things just because I can.

4. After spending all day looking at computer screens, I almost always want to do something with my hands. So, I listen to audiobooks and podcasts, and make quilts.

5. I’m an active Girl Scout troop leader for my daughter’s troop of second grade Brownies. I love teaching them about both the outdoors and STEM. Recently, we earned the basic programming badge, which was right in my wheelhouse! I’ve learned all sorts of new things myself, like how to build a wine box oven. I’m in the process of learning how to belay, so that my daughter and I can go rock-climbing together.

In 2008, Hope put out a self-produced rock album titled Beer and Pie.

Hope spent part of her junior year in Nepal. Here she is pictured in Pokhara, Nepal, with the Annapurna mountain range behind her.

Hope whacking a piñatas at her wedding.

6. At our wedding, we had two piñatas instead of a bouquet toss.

7. When I was in high school, I won a contest and a fun fact I wrote was printed on a Nantucket Nectars bottle cap. I spent all summer drinking them, but I never got my cap.

8. I have officiated at two different weddings. Not to brag, but that’s two weddings and zero divorces.

9. One of my absolute favorite things to do is to go standup paddle boarding. I own two boards (a touring board and an inflatable one), and I go as often as I can when the weather is nice.

10. I’ve been to every continent but Australia and Antarctica. In addition to my semester in Nepal, I’ve also spent a summer in Chile visiting family and a semester in South Africa studying Human Rights. I was an au pair twice—once in France and once in England and Scotland. If I had infinite free time and money, I’d spend most of it traveling!