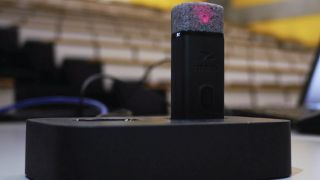 The most important thing about live-streaming isn’t video—it’s audio. Varvid CEO and founder Aaron Booker can’t stress this enough. “People are very forgiving about video; they’re not forgiving at all about audio.” He points to the tiny microphones in smartphones as the main reason they shouldn’t be used for streaming. “The video [from smartphones] can be pretty amazing these days. However, the audio is just not what it needs to be and will not reflect well on anybody.”

Aaron Booker, founder and CEO, and Richard McLean, creative director of Varvid, live-streaming for a house of worship client.
Photo courtesy of Varvid.

Booker considers audio to be the most intricate factor in media streaming. “There are a number of considerations. Do you have permanent places that you’re streaming from, like a boardroom or city council meeting or faculty senate or something where people are sitting in certain chairs?” In this case you will be using an installed solution. “But if you want something really flexible and portable because you have events that are happening in different places—then you’re going to need to invest in a good soundboard, good microphones, and most importantly in somebody’s skill set so that they can manage that for you.”

The folks at Revolabs agree, whether you’re considering streaming for corporate or university environments. Sophisticated audio processing ensures that audiences hear the rich intonation of the human voice and understand the speaker with clarity, noted Revolabs. The clear, natural sound captured by the mic system and optimized through digital signal processing (DSP) can be leveraged well beyond the walls of the auditorium or lecture hall. When audio from multiple microphones is combined with an installed AV system, remote audiences can hear the recorded presentation as clearly as people listening live in the room.

To present all speakers clearly and at the same volume, DSP is used to process the audio feeds to compensate for the size and shape of the room and the environmental factors that impact audio quality, including reverberation, acoustics, and where people are positioned. Your DSP needs are dependent on the type of microphone—wearable, handheld, directional, gooseneck, and omnidirectional—because each type has a different pickup pattern and range. DSP technology can further reduce the noise floor and boost intelligibility, but there are limits to what it can do. The best way to capture clear audio is to place mics equidistant from the people who are speaking. The closer the mic is to a person, the less likely it is to pick up unwanted noise.

According to Revolabs, one of the biggest obstacles facing AV or tech departments is audio quality and the burden and interruption of battery replacements. Wireless microphones built on DECT technology reliably deliver superior HD audio quality without interference. Their small size enables them to be stored and charged right on the lectern.

Though there is no one-size-fits-all solution for audio capture, one- and two-channel systems are the norm for voice lift and lecture capture. Wearable lapel microphones are popular because they allow the presenter to move freely about the room and to interact naturally with the audience. Gooseneck microphones, usually in 6- and 12-inch sizes, are often used on lecterns and stage tables.

A new class of USB wireless wearable microphone systems provides educational institutions options for the many classrooms that require voice lift but lack fully installed AV systems. In addition to providing a native USB cable that plugs the base unit into a laptop (which is connected via an HDMI or other wall connection), these mic systems offer USB audio without requiring the speaker to wear a headset or bulky transmitter. The wireless design allows the instructor to move freely around the room.

Built on DECT (Digital Enhanced Cordless Telecommunications) technology, these mic solutions are low-emitting systems that solve crossover or “audio bleed” issues presented in RF mic systems even when employed across numerous teaching spaces. Crossover occurs with analog RF mics that transmit on adjacent or the same frequencies. DECT is digital and segregates slots for individual mics, and the systems can automatically move into different slots if other mics are transmitting in the same slot. Because they’re digital rather than analog, users won’t hear any channel conflict; DECT protocols take care of that.

DECT operates on an unlicensed RF spectrum that won’t be sold off. Eliminating reliance on available UHF frequency spectrum, these mics can be used extensively. And because they tend to be more affordable, deployments can be scaled up as needed.

Corporate and university campuses typically have multiple buildings, often distributed across multiple sites, so the time and cost savings of centralizing control over a network can be significant. Ideally, the mic system also integrates easily with room control systems and other room solutions such as amplifiers and loop-back suppressors. A plug-and-play system that operates smoothly with other systems can deliver high performance right of the box. When equipped with onboard remote monitoring capabilities, mic systems facilitate ongoing status monitoring and ensure that AV staff members are alerted to issues as they happen. With these tools, technical teams can perform preventative maintenance and quickly and efficiently address device issues or failures.

Does a Head-worn Mic Sound as Good as a Handheld?

There’s absolutely nothing about the head-worn form factor that would cause it to deliver less sound quality than a wired handheld mic. Sound quality aside, there are many reasons to use a head-worn mic:

The mic is as close to the sound source as possible, which means less gain is required.

Another thing to consider: mic technique. Vocalists who are not positioning the mic correctly won’t get the sound they want. That’s true about any mic form factor. The good news is that engineers can help by using a windscreen as well as EQ, compression, a de-esser, and other signal processing tools.