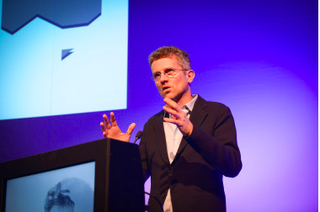 “The best way to predict the future is to create it.” Whether it was Abraham Lincoln or Peter Drucker who first said it, it was certainly a key theme for Professor Carlo Ratti at the ISE Opening Address.

For Ratti, the Internet of Things (IoT), which he sees as the second wave of the internet, can transform our cities no less than it is transforming our homes in the shape of smart homes, or our factories in terms of Industry 4.0. There are, he explained, three key aspects of this transformation: mobility, offices, and retail.

“The future is not written in stone,” he said. “It’s up to us to make the decisions about how we want to live in the future. We have it in our power to invent the way things will be.”

Ratti, architect, engineer and inventor who directs the Senseable City Lab at MIT, believes that the future is full of possibilities about how we want to work and play—and technology is the enabler of those possibilities. He places special emphasis on the idea of convergence: the convergence between different technologies, and the convergence between the digital world and the physical world. Those convergences will enable new applications, new opportunities. He and his team spend significant amounts of time modeling those possibilities for how the city of the future might look, and experimenting with them.

Ratti continued: “What’s most important is not what we’re doing, but that what we’re doing becomes public knowledge. We need to have an open conversation. The results of our work should be out there for people to consider. At the end of the day, decisions about how we will live in the future should not be made by giant corporations or scientists or states-they should be made by the citizens themselves, fully armed with the knowledge of the different possibilities. It’s they who should decide what kind of cities we will live in in the future.”

He takes as an example self-driving vehicle technology. On the one hand, that could mean a substantial reduction in the number of automobiles that our cities need to support. On the other, it could mean that we abandon mass transit systems in favor of individual transportation. One outcome could be considered positive—the other, less so. We need to know about those possibilities, and make decisions, Ratti believes.

Another key theme in his presentation is that, whatever happens in the future, it will be a reflection of our DNA.

“Take something like Facebook,” he said. “Hundreds of years ago, we got together in the village square to exchange news. Then, we sent letters. Then, we phoned. Today, we express that same basic need to communicate with others via Facebook. But, as we’ve seen recently, we need to be careful that we remain masters of that technology, rather than letting it master us. Technology is seldom without unforeseen consequences.”