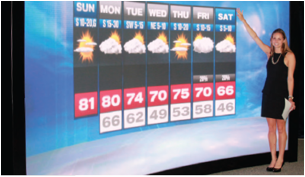 “With features like a six-inch thickness, 100,000 hour lifespan, 1,000 nit brightness, 4K camera compatibility, off-axis viewing performance, light weight, low energy consumption, zero heat and zero noise operation, plus the ability to create a display of any shape, size and curvature, we’re offering broadcasters an opportunity that no one else can match,” Robinson said.

Thanks to NanoLumens’ Moiré Elimination Technology, the Studio Pro Series can be used in any broadcast environment. Simple maintenance and longevity eliminate the need for expensive bulb replacements and provide peace of mind that the display will work when it needs to. The added benefit of producing no sound or heat helps to reduce headaches and reduce cooling costs in the studio.

Because every Studio Pro display is only six inches deep no matter how large the screen area, they also save floor space where a projection system could require 10 feet or more to produce such a large image. The ability to custom design the display to any size, shape and curvature – including circles, hearts, columns and wrap-around displays – gives set designers virtually unlimited placement options and creative usage of digital displays.

The white balance on Studio Pro displays is adjusted using a SMPTE chart and a vector scope to produce a perfect white-balanced image. The series also features fully adjustable brightness up to 1,000 nits and dynamic contrast with a matte finish that minimizes glare from studio lighting. The series’ off-axis viewing provides broadcasters with the freedom to film from up to 170 degrees horizontal and 160 degrees vertical.