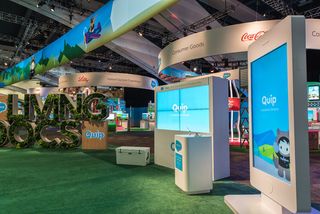 Justin Vaden, senior technical production manager, said his decision to use TiniFiber Micro Armor Cable as part of his HDMI over fiber configuration not only helped him address the myriad of challenges he faced on this project but opened doors to new possibilities for future designs.

“We have provided A/V services to SalesForce for Dreamforce in nine of the past ten years," said Vaden. "After not working on the project last year, we wanted to do everything possible to address their needs this year. TiniFiber, with its small size and high durability, helped us meet all of SalesForce’s goals."

The first obstacle occurred two days before Dreamforce was to open its doors. Vaden and his 100-person staff were asked to completely redesign the theater and video wall to better accommodate the 300’ x 115’ booth. TiniFiber allowed for a quick pre-show alteration, which proved to be a welcome benefit.

One requirement that remained after the redesign was that the system developed by Encore Productions could not have any visible cables that would interfere with the 200’ x 300’ banners rising above the booth. Featuring an outer diameter that is 65% smaller than Aluminum Interlocking Armor (AIA) cables and greater durability due to a patented Kevlar design, TiniFiber helped Encore satisfy this requirement, even though the main theater was 100 feet from the video controller.

“We needed a durable solution that could be laid on the ground and withstand being driven over by forklifts, scissor lifts and book lifts during booth construction," said Vaden. "We knew TAC 4 fiber cable was too delicate to be used in this application and we didn’t want to use copper cable. TiniFiber provided the performance of fiber and the durability of copper, which was instrumental in allowing us to create a system that satisfied the client.”

Durability was necessary after the machinery was stored away and the booth was finished and carpeted, as well. With countless show attendees visiting the booth, the TiniFiber cable had to perform while thousands of feet walked on it. Over the course of the four-day event, there was not a single glitch in any presentation or video.

“Due to the strength of TiniFiber, we were able to install the fiber under the carpet without any worries that it would be damaged. This gave us the ability to send and receive video signals without having any cables obstruct the signage in the air,” said Vaden.

To best accommodate the flow of booth traffic, the Christie Spyder video processor and presentation switcher transmitting the 4K video and presentations was installed in the back of the SalesForce booth. TiniFiber cable was run from the video controller to the 4x4 video wall located in the center of the booth. In addition to the video wall, the main theater featured a 90” portrait monitor shaped liked an iPhone that included an 84” monitor.

Every day the theater welcomed 8-10 speakers, each of whom gave a 15-minute presentation. 4K video looped to keep attendees entertained between each presenter. The theater was the focal point of the show for SalesForce, as it highlighted how the recently-acquired Quip cloud-based word processing app can extend the power of SalesForce so users collaborate more effectively and work smarter.

The Quip Wall, as it was dubbed, was only one of 14 theaters positioned throughout the SalesForce booth. Partner organizations, including Fortune 500 companies, had space allocated in the booth and conducted their own A/V presentations. For one partner, Vaden and his team ran TiniFiber from the video controller about 80 feet to five 65” monitors that displayed a looped HD video throughout the show.

It was a tall task for Vaden and his team but overall the SalesForce staff was pleased with the theater and the show was a success. The presentations and visual elements ran flawlessly, opening new possibilities for next year’s show, according to Vaden.