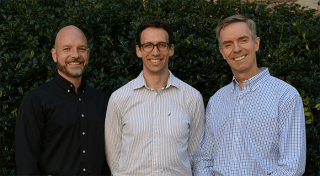 A familiar face is introducing what will soon be a familiar interface. One of those AV good guys whom everyone knows, Craig Richardson has assembled a dream team of other good AV pros who helped him to build ASPI Digital and carry it through an acquisition by Polycom 15 years ago. Entrepreneurially minded since he and the ASPI team began solving teleconferencing echo problems with fine-tuned DSP products back in the mid-1990s, Richardson has now set his sights on user experience with the launch of Aveo.

Actually, Richardson has always had his eye on user experience. While he provided hardware for the back end of systems at ASPI, Polycom, and later Symetrix, Richardson tracked how meeting participants interacted with the control technology on the front end. What he noticed is the often lamented but seldom solved AV conundrum of the ages: How do you use this thing?

Sadly, despite the industry’s best efforts, even the most confident presenters get stage fright when they see some room controllers. And ironically the consumerized touch interface age hasn’t made it easier: “A lot of customers are afraid of touch screens—it’s not that they’re physically afraid, they’re afraid that they won’t be able to make a call in front of their peers or their boss because it isn’t clear how to use the system,” Richardson described. “Even simple things can cause problems. When you walk in and the screen is dark, does that mean you should touch it, or if you touch it, is that going to cause a problem?”

The Mira Connect from Aveo

That level of apprehension presented an opportunity for Richardson and two of his engineering cohorts from Polycom, Steve Joiner and Tom Drewes, to build something new that would improve the usability of systems. And with their roots firmly planted in AV, their development efforts kept an eye toward providing AV integrators with a product that is easy to install and maintain/monitor in today’s service-model era. Thus the trio enrolled in a technology incubator at Georgia Tech and set out to build “AV Experiences Optimized,” or Aveo.

Seen for the first time at InfoComm 2016 last month, Aveo is releasing its Mira Connect touchscreen interface and Mira Portal cloud-based service for managing, monitoring, and reporting on Mira-controlled rooms and equipment.

In beta now and available later this summer, Aveo’s Mira is the total package for AV integrators who want to offer something easy to install, easy to use, and easy to market as a service offering.

Mira was built with the goal of unifying operation of the mishmash of equipment and services currently deployed in offices everywhere, supporting major conferencing and DSP manufacturers at the start, and expanding from there, Richardson said: “Our market research showed that most people are dealing with two or three different types of systems in use, either because their company grew by acquisition, or different people were buying things. So depending what room they walk into, they might have a different user experience, which leads to cases where users don’t want to meet in a particular room because they’re not familiar with the system.”

The super-simple dialer on the Mira Connect

The “easy to use” aspect stems partly from Mira’s integration with Microsoft Office 365 (more calendars/scheduling systems may be supported in the future), which allows the system to pull in calendar information and show meetings that come up for the room. So users can just walk in and push a button to join that meeting. Then a customized (but not TOO customized) control screen pops up to provide clean and clear operation of the technology in the room. “When there are buttons everywhere, it can be intimidating—users don’t know where to start when there are 20 buttons on the screen,” Richardson observed. “With Mira Connect, what we wanted to do was really focus on the workflow and make it easy for people to use a room.”

If that’s not easy enough to use, Mira Portal’s three levels of service offerings make it easy for integrators to build in remote operation capabilities so an in-house tech manager or the integrator’s own support staff can invisibly make a room work at its best during a meeting.

That’s good news for AV providers looking to shift sales away from hardware and toward ongoing service and support relationships. “After an integrator has installed something, that’s usually the end of the relationship,” Richardson said. “We wanted to make it easy for the integrator to offer some kind of service and provide data on how the room is used, or help provide a way for the end user to do it, to foster more of a partnership.”