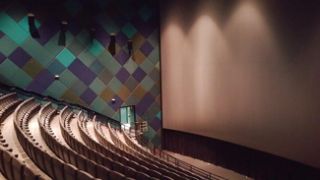 The Audubon Nature Institute’s $1.2 million Entergy Giant Screen Theater opened October 15 with Disney's full-length feature “The Little Mermaid” in 3D. A grand opening slated for November 18 will include the premiere of “Journey to Space,” a documentary on the ongoing mission to Mars, narrated by Patrick Stewart and presented by the theater’s sponsor, Giant Screen Films.Entertainment Supply & Technologies cinema engineers of Tampa, FL renovated the existing theater at Audubon, coordinating and installing an entirely new, fully digital experience. In addition to the Severtson screen, the new Christie Duo 4K digital projection with 46-channel Dolby ATMOS sound allows Audubon to have its pick of first-run Hollywood features. The new immersive sound is supported by QSC audio components mounted on StarGrid, a proprietary speaker grid system by Adaptive Technologies Group.

“We knew the quality of the Severtson giant screen was what we were looking for, and that they could produce it on schedule was vital because timing was everything for this project,” said Bruce Schneiter, senior vice president of technical services at Entertainment Supply & Technologies.“Severtson was not only able to create and deliver the desired screen on time, but their new folded shipping capability made it so we didn’t have to take any walls down in order to get the enormous screen into the auditorium.”

According to Dan Maxwell, vice president and chief operating officer at Severtson Screens, typically a screen of this size would need to be packed into a 50-foot-wide crate. “Due to our folded screen technology, the crate size was merely 14 feet, making it very easy to maneuver into and through the building,” he said. “These folded screens are highly efficient for significant international savings with shipping, but also offer great benefits domestically with complex installation such as this one where it was nearly impossible to get a long crate into the building without cutting a hole in the wall.”