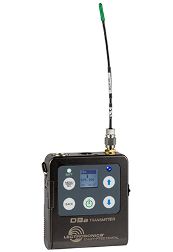 Wireless product manufacturers have been raising awareness of the industry’s RF spectrum issues with the FCC for years, in collaboration with the DTV Audio Group and other organizations and individuals. Shure, one of the companies spearheading that initiative, has created an online Incentive Auction Resource Center to keep users informed of the evolving regulations and spectrum availability.

“It has been difficult for wireless users to find information that is accurate and timely, yet easy to understand,” says Mark Brunner, Shure’s VP of corporate and government relations. “The Incentive Auction Resource Center is designed to keep them up to date and let them know what Shure is doing to address their wireless needs, now and in the future.”

Like other manufacturers, Shure has been addressing the shrinking spectrum for some time (RF micmakers could see which way the wind was blowing a decade or more ago). The new GLX-D Advanced Frequency Manager, for example, enables users to operate up to nine simultaneous GLX-D Advanced systems in typical conditions, or 11 channels in optimal conditions. Shure has also updated its v6.12 Wireless Workbench system control software to include a new logging utility designed to capture essential channel status information and a new set of frequency coordination enhancements, specifically targeting applications with high-channel counts.

In September 2017, Audio-Technica announced the formation of a subsidiary company, Alteros, dedicated to providing solutions that address an evolving RF landscape in which usage is increasing yet available spectrum is shrinking. At NAB 2017, Alteros will unveil its first product, the fully digital GTX Series Ultra-Wideband (UWB) Wireless Microphone System, which operates above 6 GHz, well beyond the TV bands or the need for an operator’s license, database registration or special temporary authority (STA).

No frequency coordination is necessary, not least since the GTX Series does not cause interference or create intermodulation products. In fact, says Jackie Green, Alteros president and CTO, “Every channel of wireless that is deployed utilizing the GTX system over traditional methods actually cleans up the RF noise floor and improves intermodulation and coordination efforts for any remaining vintage wireless in use.”

Sennheiser has just started shipping its Digital 6000 wireless system, which was announced late last year. According to product manager Tom Vollmers, “It brings the benefits of the Long Range mode of our benchmark Digital 9000 system to a two-channel receiver, while allowing the use of standard UHF antennas and existing Sennheiser capsules or microphones.”

The system supports up to eight daisy-chained EM 6000 receiver units to be cascaded from a single pair of antennas. Digital 6000’s onboard frequency-selective input filters allow operation with existing standard active and passive wideband UHF antennas, maximizing return on investment. Integration with analog or digital system infrastructures is made possible via AES-3 and transformer-balanced XLR and quarterinch jack outputs; an optional Dante-enabled version is available.

The system’s auto-setup feature enables scanning and frequency distribution to all connected devices directly from the receiver’s LCD display. Alternatively, Digital 6000 may be configured and monitored with Sennheiser’s WSM (Wireless Systems Manager) software.

Lectrosonics has been at the forefront of wideband tuning with its products, enabling users to find operable frequencies even in dense RF environments. Most recently, the company introduced the DBa, a digital belt-pack transmitter tuning from 470 MHz to 698 MHz that also incorporates a highly linear RF output stage for reduced intermodulation distortion.

Late last year, Lectrosonics unveiled a product that, while not strictly addressing the RF spectrum, does offer wireless operators a novel solution in certain circumstances. The PDR is a personal digital recorder in a belt-pack transmitter form factor that records 48 kHz/24 bit Broadcast WAV format files to a Micro SD card (HC type). The input connection and wiring is compatible with microphones pre-wired for use with Lectrosonics professional wireless microphone transmitters with servo bias-type inputs.

DPA Microphones may not make wireless transmitters or receivers, but its products are frequently paired with third-party RF gear. Further extending that capability at NAB 2017, DPA will introduce the MMPG modular active cable, which the company says is “an ultra-transparent preamplifier with active drive for impedance balancing to reject frequency interference.” The MMP-G permits DPA’s modular d:dicate capsules to connect to wireless systems via its fixed MicroDot connector.

Christopher Spahr, VP of marketing and sales for DPA Microphones, says, “The addition of new accessories that allow our microphones to become wireless, opens up more choices for our customers who need flexible solutions. Our R&D department has also been hard at work to develop a new solution for our mobile journalist customers. We look forward to debuting this new solution at NAB 2017.”