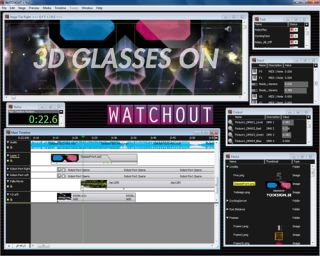 Dataton will be demonstrating version 5.2 of Dataton WATCHOUT™ multi-display production and playback system at ISE 2012. The new addition to its version 5 software incorporates advanced spatial interaction and video integration capabilities.

“We look forward to introducing the new features of WATCHOUT version 5.2 at ISE 2012 and will be hosting hourly presentations on our booth showing its latest feature set and capabilities,” says Fredrik Svahnberg, Marketing and Communications Manager at Dataton.

Live interaction with version 5.2
Version 5.2 offers the ability to interact with live components and assets of interactive media, such as Flash cross-platform, browser-based applications. Version 5 not only lets users position, rotate and move all media objects in 3D, but also for these tools to be used interactively. WATCHOUT understands virtually any kind of device or external system, allowing the user to connect sensors and control sources – like iPads – directly to on-screen elements such as images, video, live feeds and more. For example, these sensors can be used to track speaker audio on stage with the graphics apparently following the presenter.

Built-in text editor
The new built-in text editor in version 5.2 allows users to make those last minute changes, or additions, in WATCHOUT presentation text – even without graphics software, like Photoshop, on hand.

Lighting show on cue
Producers will appreciate the DMX learn function in version 5.2. With this new feature you can record a complete lighting show and play it back from a single cue in WATCHOUT.

Version 5 also offers 3D effects and stage preview to position and rotate all media objects, including motion paths and video fly through in any desired way. WATCHOUT incorporates seamless stereoscopic playback. Support is offered for multi-head output cards, meaning that up to six displays can be driven off one suitably equipped display computer, all using a single WATCHOUT license.

WATCHOUT 5 has received the Media Server product category in the Commercial Integrator Awards 2011. Dataton WATCHOUT was also recognized with an award for Best Show Control Product at the Infocomm 2011/Rental and Staging New Product Awards.