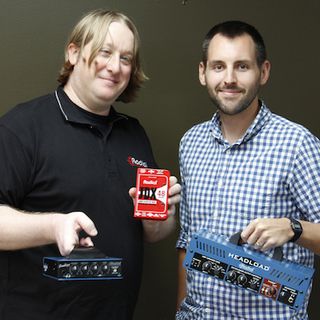 Radial Engineering Ltd. is pleased to introduce two new members of the Vancouver, BC based team.

Ryan Tobias (left) and Mike Bauer (right)Ryan Tobias joins Inside Sales, Central Region. Ryan learned the business of live sound before taking his formal education in audio engineering and recording while living in his home state of Ohio. After a few years of live engineer mixing onboard cruise ships, Ryan decided to jump ship and put down roots in Vancouver, BC where he's since gained experience working in studios, including producing from his own home studio and gradually moving into sales.

Mike Bauer has joined Radial's Tech Support Team with a focus on custom product requests for snakes, splitters and stage boxes. Before taking on this position, Mike worked as an audio engineer in New York City in various capacities for several years. A native of Saskatoon, Saskatchewan, Mike was drawn to Vancouver, relocating this year to assume his role as part of the Radial team.