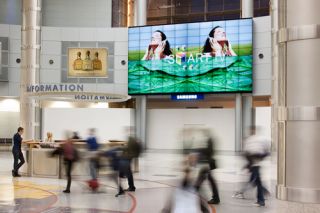 Premier Mounts took on one of its most ambitious projects by supplying precision-engineered custom mounts for the McCarran International Airport video wall. Touted as the largest video wall in a US airport, Premier Mounts provided the “backbone” for this successful undertaking.

Using their custom design and manufacturing expertise, Premier Mounts designed a custom mounting system specific to this video wall matrix at McCarran. Precision mounts fabricated to tolerances of 0.010 inch allowed for quick and accurate installation. They also have a 9-inch pullout feature for display serviceability, as well as wall plates that maximize airflow between the displays and the ventilation fans built into the wall. Post-installation leveling and fine-tuning is simple with the precision adjustments of the display brackets.

Partners in the project included Samsung, which provided the displays, and Las Vegas-based Vision Sign, which designed and installed the structural framework.

“We are very proud to have been chosen for this project at McCarran Airport,” said Rich Pierro, director of manufacturing at Premier Mounts. “There’s a lot happening behind the scenes of these 100 Samsung displays and a great deal of weight is supported by the system. Our engineers were able to provide a design that would fulfill the structural needs of the video wall mounting system while maintaining accuracy of alignment, serviceability, and ventilation for the displays. The true test on a project of this scale is that we have one chance to deliver a perfectly functioning, custom-designed manufactured product on time. And because more than 16 million viewers per year are going to be the audience, it must stand the test of time as well.”

Alliance Airport Advertising, which develops and manages all of the airport’s advertising contracts, is largely responsible for solidifying the McCarran-Samsung-Premier Mounts project. “We did a lot of research before selecting Premier,” said Shauna Forsythe, chief executive officer of Alliance. “Before this wall went up, we had to know that the mounting system would be precise. There’s no room for error, and we were confident that Premier Mounts was going to deliver that expertise. They’ve been great to work with and we’re all very excited with this landmark video wall.”