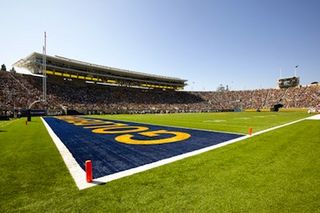 The slender 10-foot-high columns, mounted around the stadium's outer rim, provide a solution that preserves the architectural integrity of the historic structure-inspired by Rome's Coliseum-while also providing high speech intelligibility despite the crowd noise in the 63,000-capacity seating bowl.

As part of the $321 million, two-year upgrade project, Dallas-based acoustical consultants Wrightson, Johnson, Haddon & Williams, Inc. (WJHW) was given the challenge to improve the audio clarity for the audience in the bowl and minimize noise concerns for the nearest residences that are only about 200 feet away. WJHW also had to make sure the new sound system would maintain the architectural integrity of the clean, classical lines.

For both architectural and environmental noise reasons, a point-source, scoreboard-mounted system was prohibitively problematic. "We concluded fairly early in the process that a distributed system was the best solution," recalls WJHW Principal Jack Wrightson. "Later we found out that Meyer Sound was developing the CAL loudspeaker, and it ended up being the right solution. It kept the historic look of the façade and by all accounts the university is very happy with the performance."

Thirty-eight of the CAL 96 loudspeakers are spaced around most of the bowl rim (except for the press box section), with the slender enclosures blending with surrounding flagpoles. The coherent, wide-bandwidth sound is precisely steered to cover the stands with minimal spill onto the field-and into referee microphones.

"From an architectural viewpoint, we loved it," said Joe Diesko, vice president at lead architects HNTB and project manager for the architectural team. "The traditional distributed approach would be big square boxes sitting up there, and a big cluster at one end was out of the question. The CAL solution was just brilliant. They look great, and they sound fabulous."

Jack Wrightson is also pleased by the system's aesthetic qualities, as well as its performance during commissioning. "We measured an STI-PA average at 0.70 throughout the seating bowl, which is exceptional for a football stadium," he said.

Including more than 200 Meyer Sound loudspeakers, the entire audio system was designed by John Kosco of WJHW under Jack Wrightson's direction. Installation was by Parsons Technologies of Minneapolis, MN, with Jasyn Rousselow serving as lead sound integrator and Rich Norby as crew chief.