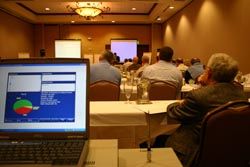 Wesley Sutliff, product manager for Media Vision, running the show. Some questions had been pre-set into the TAIDEN software, where others were asked on the fly.
"The voting process during our WTAS Partners meeting was a success because of... Conference Rental USA's electronic voting system," said Patricia Kramer, training administrator at WTAS, "We all were impressed with the system itself and its simplicity and accuracy."

The TAIDEN 4100 Wireless Voting System consisted of 90 wireless voting handsets, one central control unit, and one Conference Rental USA operator to ensure that the conference ran smoothly. Some questions had been pre-set into the TAIDEN software, where others were asked on the fly; yet no matter how quickly the conference moved the Taiden software was able to keep pace by offering real time results for the conference attendees to discuss.

Prior to the event, Conference Rental USA met with the key players from WTAS via an online webinar and was able to demonstrate the operation of the TAIDEN hardware and software. The primary concerns from WTAS was how intuitive the devices would be to use, would the conference attendees be able to vote on questions that arose during the discussions that had not been previously set up, and of course, would the system be something that they could afford? After the webinar was finished WTAS could see that the answer to all three of their questions was an easy YES.

The TAIDEN 4100 Wireless Voting System handset.
What WTAS thought might be challenging were questions to be voted on that arose during the sessions. The concern was that if the question had not previously been entered into the software, it would slow the meeting down to do so live. Wesley Sutliff, product manager for Media Vision, who ran the show, said, "I admitted to the organizer Pat Kramer that I am not a speedy typist (nor am I the best speller), however we devised a method in which I would label questions such as these in short hand. An example would be, "Q1: yes or no?" This method worked extremely well, and demonstrated just how adaptable the software can be during an actual session."

Another challenge that WTAS thought about was whether some of the less technical members of the session would be able to operate the hardware. This challenge was also easily overcome by a brief demonstration at the very beginning of the meeting. By having an example question for a "yes or no" response and an example question for a multiple choice response everyone of the participators could see clearly how to operate the devices.

WTAS concluded their annual conference knowing that they were continuing to grow as a national company; as individual partners they left knowing that their voices had been heard and their opinions had been taken seriously. After the two-day conference, the Conference Rental USA operator was able to export all of the voting results to a Microsoft Word document and save the information to a USB memory stick. WTAS used this information to create a white pages report on their entire conference, allowing all attending members the ability to review the topics that they had discussed.