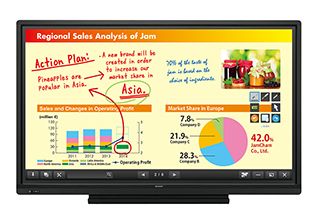 At this year’s InfoComm, manufacturers are rolling out a new generation of multi-touch display and projection systems that continue to expand the boundaries of the technology in a fast-growing market segment.

“We came out with the V series probably six months before the overlays,” he said. “And we had a number of installs where people said they’d like to retrofit.”

The displays and overlays are HID compliant for a number of operating systems, he added. The overlay, coupled with adoption of Windows 8, will enable new content swiping capabilities. A new desktop touch screen is also being introduced at InfoComm.

On the projection side, NEC plans to launch a 1x2 or 1x3 display. “It’s going to have two or three projectors blended side by side, and there’s going to be a laser curtain over the top. That’s going to allow us to not have to use a stylus for touch—you can actually use a finger.”

According to Gary Bailer, director of product planning and marketing for Sharp's Pro AV products, “We are the number one-seller of B2B embedded interactive touch systems for 55 inches and larger in the United States.” Sharp’s plans for new multi-touch product introductions at InfoComm include its Aquos Board interactive display system.

Aimed at collaborative spaces such as small meeting rooms or hotel rental spaces, the new A models, shipping summer 2014, are turnkey systems with embedded control, to avoid user interference. “Built into that embedded controller is the Sharp Pen Software—interactive whiteboarding software—as well as Sharp’s Touch Display Link software,” said Bailer. The latter software enables the sharing of annotations and drawings between the display and connected devices. Sharp’s optional wePresent wireless gateway additionally allows users to share content from devices running on any operating system to the multi-touch displays for annotation, collaboration, and further dissemination.

Market adoption of multi-touch systems for BYOD collaboration has been rapid, observed Rodney Laney, vice president of display technology for video communications provider AVI-SPL. “Flat panel sales and video walls and the touch that goes with it are probably rising about twice as fast as projection is declining.”

Sharp's plans for new multi-touch product introductions at InfoComm include its Aquos Board interactive display system.

Looking to the future, said Laney, “I think we’re going to see the collaborative conference room space as a huge target market for this type of product. As they become more intuitive, the limit to the venue that they would work within is going away.”

Multi-touch technology appears to have reached its practicable user limit. “One of the areas we grapple with is: why does anybody need 10-point? If I’ve got four users and each has two fingers, that’s eight points,” said Bailer. “The technology is at 32 touch points already, but how many people can you realistically accommodate on the same surface area simultaneously?”

“Ten points seems to be the sweet spot for us right now,” said Hardy.