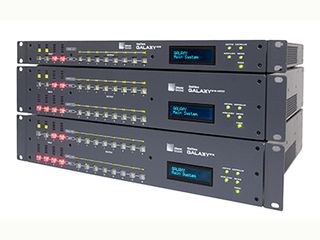 The What: The Meyer Sound Galileo GALAXY network platform will make its debut at InfoComm 2016 in Las Vegas. In demo room N112, “Real World SPL” will present the company’s approach toward measuring SPL to achieve real-world results. The importance of headroom and low distortion will be demonstrated through a Meyer Sound cinema system.

The What Else: The Galileo GALAXY network platform marks the next step for the Galileo platform that was first launched in 2005. GALAXY is the first Meyer Sound loudspeaker processor to be fully networkable, with multiple units sharing 24-bit/96 kHz multi-channel audio via an AVB network. Maximum input count has been increased from six to eight for easier implementation of 7.1 systems, and a new generation of FPGA-based processing with 96 kHz floating point resolution delivers increased dynamic range, a lower noise floor, and latency of 0.6ms analog in to analog out.

“GALAXY is a brand new platform, and it again moves the proven Galileo concept to the forefront of digital loudspeaker processing,” said John McMahon, Meyer Sound’s vice president of solutions and strategy. “It stands alone in its field in terms of open-source networkability, pristine audio performance, and meticulous engineering of the filtering algorithms.”

Other features new to GALAXY include a delay matrix, easier integration with Crestron and other third-party controllers, a word clock input on the AES3 version, and improved equalization tools. The first three versions, GALAXY 816, GALAXY 816-AES3, and GALAXY 408, will ship September 2016.