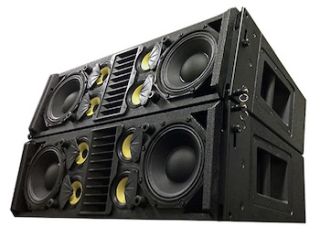 The What: VUE Audiotechnik has unveiled their new al-8 Compact Line Array System to be available fall 2013.

The al-8 system components include flying, transport and handling accessories, the al-8 acoustic element, and the rack-mount V6 Systems Engine, which provides system amplification, DSP, and networking capabilities via the SystemVUE control software.

All transducers are housed in a birch plywood enclosure protected by a 12-step Dura-Coat LX finish. Integrated flying hardware allows quick assembly of arrays of up to 16 elements per flybar. Rear panel I/O includes a pair of NL8 connectors configured to allow discrete access to each compression driver.

The 2U rack-mount V6 Systems Engine will tri-amp up to four al-8 acoustic elements. The V6 also houses a 64-bit DSP engine that handles all management functions including speaker protection, system-optimized alignment of EQ, time and crossover, and SystemVUE network connectivity.

The Why: "The al-8 is a significant step toward offering a complete tool box of solutions that combine class-leading performance, consistent sonic character, and exceptional value," said VUE's head of North American sales, Jeff Taylor. "Like the al-4, the al-8 demonstrates VUE's commitment to leveraging advanced technologies in order to deliver systems that integrate seamlessly into a broad range of environments, while providing a more effortless and enjoyable user experience overall."

• SystemVUE network and software: Utilizes standard IP for easy networking. Simply plug-in and the system will automatically connect in virtually any kind of configuration.