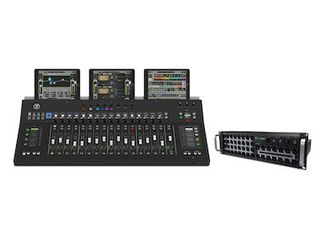 Mackie is among a list of firms co-sponsoring the sixth annual Dante AV Networking World education event during InfoComm 2016. The workshop, to be held on June 7th at the Treasure Island hotel in Las Vegas, will feature in-depth training with two separate tracks: one for attendees that are new to Dante, and another for more experienced Dante users

Audinate will also introduce its new two level Dante certification program at the event. Dante AV Networking World will give design consultants, system integrators, audio engineers and IT managers the tools and information they need to get the most out of Audinate's revolutionary audio networking solution.

As part of the workshop, Mackie will be showing the new AXIS Digital Mixing System, offering a Dante capable mixing solution for professional production and system integration applications. The modular 32-channel system aims to drastically speed up workflow through visual feedback and customization. Multiple guided seminars are also available daily throughout the show at the Mackie booth (#C9745).

The free all-day conference will open with a general session for all attendees featuring the following presentations:

Following the joint general session, attendees will have the option of attending one of two tracks. Track 1 is designed for attendees that are new to Dante, and are looking for the basic foundation to get started.

This track will feature the following two sessions:

Track 2 is geared toward attendees that are already using Dante, and are looking to create more advanced systems and learn best practices. This track will feature the following two sessions:

The program runs from 9:00 am to 4:30 pm and includes a catered lunch for all attendees and a hosted cocktail reception to conclude the day.