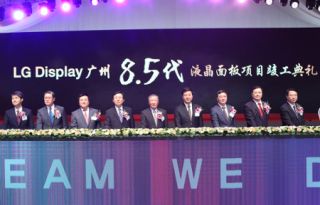 “By operating our first overseas LCD panel plant in China, which has now became the world’s biggest TV market, we are going to further strengthen our position in the country,” said Dr. Sang Beom Han, CEO and President of LG Display, at the ceremony attended by top executives from LG Group, representatives of major Chinese TV manufacturers and government officials from China and Korea.

The LG Display China facility will mainly focus on producing 42-inch, 49-inch and 55-inch Ultra HD and Full HD panels, aiming to advance its leadership in the Chinese premium TV market. The company will produce 60,000 sheets per month based on input glass sheets in the initial stage of operation and achieve full capacity of 120,000 sheets per month by the end of 2016.

The Guangzhou panel plant will enable LG Display to solidify its competitiveness in China as well as the global market by saving costs, improving on-time local delivery, and providing fast technical support to Chinese customers.

LG Display is confident that the Guangzhou plant will improve production efficiency. The company believes that maximizing production efficiency, combined with differentiated strategies such as making high-end, high value-added products and developing niche markets, will maintain its global leadership. The company is expecting improved cost advantages in terms of logistics and lower tariffs by locating in Guangzhou, close to major Chinese TV makers, including Skyworth, Konka, and TCL, operating in Guangdong Province.

The Guangzhou panel plant also has achieved a landmark by being recognized by the Chinese government as the country’s first ‘Green Plant’ after it passed a stringent certification process as part of the “Green China Policy.”

In being recognized as China’s first “Green Plant,” the new LG Display facility had to pass China’s Certification System as well as seven international certifications, including Environmental Management (ISO14001) and Safety and Health Management (OHSAS18001). This reflects LG Display’s commitment to creating an environmental-friendly production strategy, which was highlighted by applying the international standard system from the initial stage of the Guangzhou panel plant’s construction.