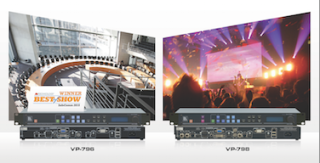 The What: During InfoComm 2015, Kramer announced the release of the VP-796 and VP-798, the world's fastest single-channel 4K presentation scaler-switchers. Both scaler-switchers incorporate HQUltraFast technology to switch in typically a quarter of a second, at least four to six times faster than any competitor in the market.