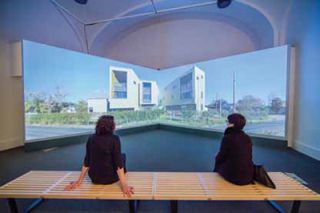 A mini-theater with bench seating shows “Welcome Home”, a film projected onto two 16x9-foot screens configured in a
V-shape.Washington, D.C.’s National Building Museum’s major new “House and Home” exhibition, running through spring 2017, presents an array of photos, objects, models, and films that show visitors the remarkable changes in domestic life over the centuries and what it means to be at home in America.

“The big challenge for us was working in a landmark building,” noted Randy Sherwood, engineering project manager for Electrosonic, which designed, fabricated, programmed, and installed AV equipment for select galleries and trained the museum staff to operate and troubleshoot the installation. “The museum is such a cool space, and we had to work with the existing fabric of the building. We used existing lighting tracks to hang speakers in galleries five and seven because they wanted to avoid new penetrations in the red brick structure that was completed in 1887. In order to avoid acoustic issues, it was imperative to keep the audio localized and at low levels because all the ceilings are domed.”

Electrosonic provided six continuous-play video kiosks featuring a portrait-mounted 32-inch, open-frame i-Tech LCD monitor to three of the Living at
Home galleries.Electrosonic provided a total of six continuous-play video kiosks to three of the Living at Home galleries. These galleries display hundreds of household goods used over the past several centuries from a butter churn and hand-painted screen door to a must-have fondue set and Farrah Fawcett poster. Each kiosk features a portrait-mounted 32-inch, open-frame i-Tech LCD monitor. The video interface, video player and an ethernet-controlled power bar are mounted under the floor at the base of the kiosk and are accessible via a security cover. An ethernet cable leads from the floor to the equipment rack located behind the screens in gallery five.

Gallery five showcases “Experience the Dwelling,” a mini-theater with bench seating, where visitors watch “Welcome Home”, a film projected onto two 16x9-foot screens configured in a V-shape. Electrosonic furnished two Christie DHD670-E single-chip DL P projectors mounted from the ceiling at a height and angle designed to clear the seated audience. Audio is delivered by four overhead-mounted JBL loudspeakers and controlled by a programmable DSP, which feeds a 4-channel amplifier that connects to the speakers. Video playback is from an Extron JMP 9600 2K, which connects to the projectors via UTP interfaces. Source equipment is rack mounted and housed behind the screens through an access-controlled door. It also houses a computer with a purpose programmed control screen from which changes to the playback routines can be effected.

The last gallery focuses on “House and Community” with developers, contractors, residents, and real-estate agents giving visitors a look at six different communities. Electrosonic supplied three 42-inch i-Tech LCD monitors and overhead-mounted Panphonics speakers, which present two video programs on a continuous loop. A BrightSign media player, the PSU for the speakers and an ethernet-controlled power bar are mounted within the wall at the monitoring room and accessible via a security cover. A line level signal cable and PSU cable connect the overhead loudspeaker to the equipment within the wall. The focused Panphonics speaker includes a built-in amplifier. An ethernet cable leads from within the wall to the equipment rack located behind the screens in gallery five.